The panel consisted of four experts from the fields of politics and sustainability.
Photo by Larissa Davis.

Jeanine Knapp is the Sustainability Leader at ThedaCare, and said that working with investments led her to study economics and understand that “government influence and policy will help us move forward with environmental policy.” Knapp has held many positions related to sustainability and currently oversees many sustainability initiatives in ThedaCare.

Professor of Geology and Special Assistant to the President Jeffrey Clark became interested in sustainability due to having spent a lot of time studying the earth, which has given him a sense of personal investment in trying to improve the condition of the environment.

Seth Hoffmeister is the Field Director for the Wisconsin League of Conservation Voters, and he says that working at a summer camp introduced him to people from that organization and gave him the opportunity to talk to people about conservation, which eventually led him to his current position. 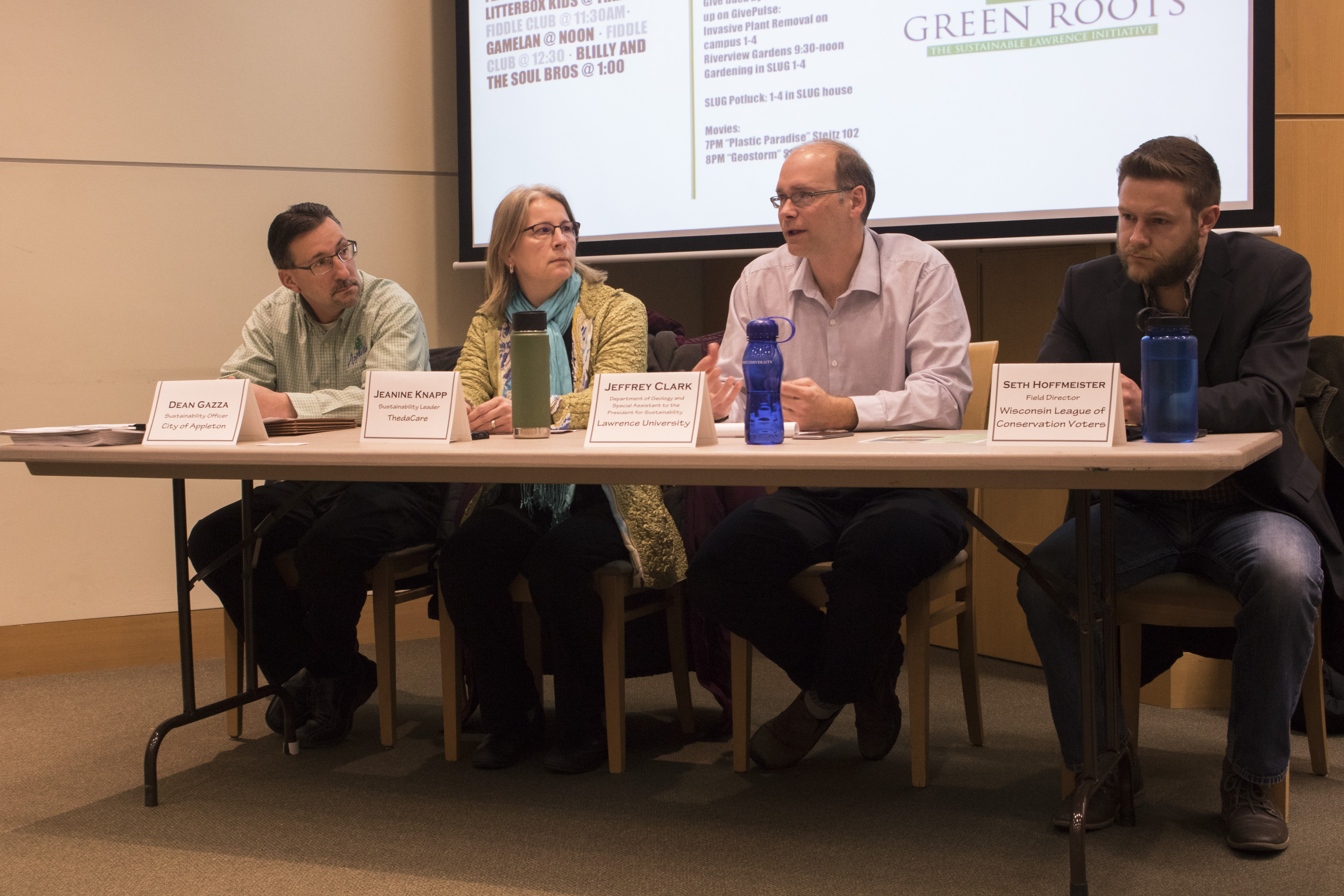 Griffin started the discussion by asking the panelists what they thought the greatest opportunity for creating change in the environment is. Hoffmeister answered first, saying he was optimistic about a potential for change, and that if people become active in the political process, a lot of change can be made. Clark agreed that there is a large amount of opportunity for political growth, but said he was worried about unintentional apathy towards the environment. Clark stated that everyone needs to take steps to live sustainably.

Knapp thought that much of the work that can be done is through working with people and caring about others, since living a healthy life and encouraging others to do so also means living in a healthy environment. Gazza thought that personal accountability was where the most opportunity for improvement was. Gazza also says that there needs to be more action by governments towards creating a clean environment.

Next, the audience asked questions. One person asked, where the panel thought the general mistrust of science has come from, and how can this be stopped? Hoffmeister said that the root of this problem is money. Hoffmeister went on, saying that a lot of environmental regulations, such as ones that are meant to keep water clean, are ignored due to the process of companies and organizations giving money to politicians.

Hoffmeister said there is a cycle that has started since the Citizens United decision where politicians do not want to enforce regulations in certain areas because they do not want to alienate donors, so companies in those areas give them more donations for not enforcing these regulations. Knapp also responded, saying that a lot of people just do not know how the environment affects their lives. If people understand how a polluted environment is actually affecting their health and the health of their families, they will put more pressure on representatives to uphold regulations.

After several more audience questions, Griffin had the panel give some closing wisdom and optimism to the audience. Gazza said that more people should get involved and show up to municipal meetings and talk to family and neighbors about issues rather than avoiding them because they are uncomfortable. Knapp stated that mental health matters with how we respond to the environment and that people should take care of each other. Clark emphasized the need for people to become politically engaged, and Hoffmeister said that people need to remember that their voices matter. “When I talk to people and have these conversations, I’m reminded the hope is there to make a change,” said Hoffmeister.

The panel consisted of four experts from the fields of politics and sustainability. Photo by Larissa Davis. To provide local solutions to environmental issues and make tackling global environmental issues less demoralizing, an interactive panel discussion, “State of the World: Local Solutions to Global Environmental Issues,” was hosted by Sustainable Lawrence University Gardens (SLUG). This…