During the lunch hour on Wednesday, new students line up with bookbags and course lists trying to get dibs on classes on the first day of registration.
Devin Burke 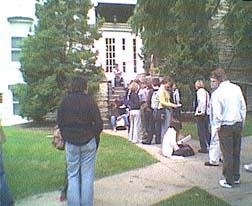 During the lunch hour on Wednesday, new students line up with bookbags and course lists trying to get dibs on classes on the first day of registration. (Sandi Schwert)

The ambitious construction that occurred over the summer has shuffled the conservatory like a deck of cards and cut it into two buildings. Although some decisions are still to be made, the move was executed in quick fashion.Nine conservatory faculty now work in what affectionately has been dubbed Con West, short for Conservatory of Music West Offices. The new space, which is located above Taste of Thai on College Avenue, has also won such honorary titles as “The West Wing,” “The Con Con” and “The West Campus.”

To anyone who has seen the area before and after, the difference is startling. Last year, student publications and phon-a-thon used the space, which included editorial offices, call center, an artist’s studio, and a dark room. All the publications have been moved to Mursell House, and phon-a-thon now resides behind Physical Plant.

“They put a hallway through the whole middle of the building,” said Ellen Mitala, senior administrative assistant in the Conservatory, describing the extent of the changes. In the construction process, nearly all traces of the old space have been removed, save for restrooms and a cabinet, once used by Ariel. Mysteriously, it managed to remain amid the storm of construction.

Con West now contains eight offices and one room where students can warm up for their lesson. The doors will open at 8 a.m. on weekdays. The closing time is yet to be determined, and may vary depending upon the day of the week.

Construction began as late as early July while an organizational briar patch developed in both Con West and its counterpart. As workers knocked down walls and rushed to remodel the entire space, a small team of students and faculty hurriedly packed up everything. Two students in particular, seniors Rebecca Dirksen and Will Samson, did most of the packing and moving.

The move required the coordination and cooperation of many campus services, including the conservatory, computer services, the campus activities office, and all the groups and individuals who moved into new spaces this fall. Ellen Mitala had much to do with the work, although she acknowledges it was a group effort.

Computer Services had to time their work just right so that when the movers took a certain desk with a computer to a new room, they were there to hook it up as soon as it made it to the new office. Bit by bit, much of the conservatory became mobile across College Avenue.

The real heroes of the summer, however, were the piano movers. A small group of young and slightly built high school students and one piano mover came to move three grand pianos to Con West. The route across the street culminated in a steep flight of stairs. Everyone who witnessed the work the piano movers put in still speak of it with a bit of awe.

A total of 28 faculty and staff have new offices, in Con West, Waterman House, or in rooms within the Music-Drama Building or Shattuck Hall. The jazz department faculty has remained in the same area, although offices have shifted around. However, all of the large ensemble directors’ offices except for Professor Robert Levy’s are now found in Con West.

The old con, or Con East one might call it, has also changed over the summer. A total of nine new conservatory faculty have been hired this year, and new offices had to be delegated. As a result, new students may have less trouble finding their way around than old veterans.

The need for space will remain a continuing problem as long as Lawrence maintains its expansion. The size of this year’s matriculating class and its nearly 80 music majors will press the issue. Right now, at least for the faculty, the conservatory is enjoying a little breathing room.