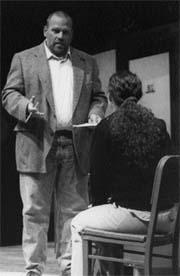 Roger Ebert once wrote, “Experiencing David Mamet’s play Oleanna on the stage was one of the most stimulating experiences I’ve ever had in a theater. In two acts, he succeeded in enraging all of the audience—the women with the first act, the men with the second.”Oleanna tells of a college student, Carol, and her professor, John, who sit down to discuss her grades. As the three-act play unfolds, the initial conversation becomes the basis for a sexual harassment suit and a power struggle that threatens the bright futures of the characters.

Theater and Drama faculty member Timothy X. Troy, ’85, brings this controversial play to the stage of Cloak Theatre in the Music-Drama Center Sept. 27 and 28.

Mamet’s most famous play is well suited to a college campus, Troy says, because “during three short acts, he explores issues of learning, power, and gender relations in a college setting.” The two-character play stars LU senior theater major Elaine Gajewski as Carol, and John Koker, a math professor at UW-Oshkosh, as Carol’s professor.

“We started working on [Gajewski’s] character together last year,” says Troy. “She’s done a lot of research into the play, the playwright, and past productions of the play. She will perform it for us as her senior project.”

“Since the play was so suited to a college campus, the fact that I directed the production, and that we used Cloak Theatre for it, it seemed natural to re-mount the production for a campus-wide audience,” says Troy.

Oleanna continues a tradition of productions at Lawrence during the first week of fall term, which Troy describes as “a way to get people into the theater right away as the year began, and before we could mount a department production with students.”

“In the past we brought two productions from the Boulevard Ensemble in Milwaukee: Betrayal by Harold Pinter and The Woolgatherer by William Mastrosimone,” Troy says. “In both cases I directed these professional productions in Milwaukee and then re-assembled the casts for performances here at Lawrence.

Tickets for the 7:35 p.m. performances Friday and Saturday are available at no charge to Lawrence students at the box office in Brokaw Hall or at the door on a first-come, first-served basis.

After the performance, actors and members of the LU Sexual Harassment Board will conduct a talk-back session “to help audience members sort out some of the issues in the play,” says Troy.

This term, the LU drama department will also host London Stage Residency actors for Shakespeare’s Much Ado About Nothing, Oct. 23-26. Additionally, Lawrence students will perform the fall term musical, Kiss Me Kate, Nov. 14-17.