MAYU AOKI, AKAKIO MATSUO, AND HIROKO MORI enjoy a party in Sage Hall on Wednesday, September 18. They are among 19 Japanese students from Waseda University attending Lawrence this year as part of a new exchange program.
Peter Gillette 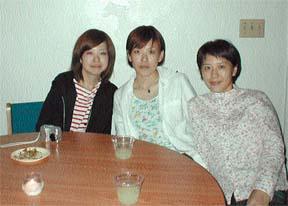 MAYU AOKI, AKAKIO MATSUO, AND HIROKO MORI enjoy a party in Sage Hall on Wednesday, September 18. They are among 19 Japanese students from Waseda University attending Lawrence this year as part of a new exchange program. (Sandi Schwert)

The Lawrence University campus is now filled with 19 smiling faces from Waseda (WAH-seh-dah) University in Waseda, Japan.For the next year, those students, along with their American hosts, will be tackling the usual academic and social issues that come with the residence life territory. Add to those difficulties the language barrier, since many of the Waseda students arrive without a firm command of English.

“Many of the Waseda students are arriving here in a similar situation as Lawrence students who study abroad and may spend the trip gradually learning the language,” said Dean of Faculty Brian Rosenberg.

Waseda University initiated the program to encourage more of its students to study abroad, and solicited proposals for prospective programs from several Midwest and West Coast schools. Lawrence’s proposal was among four chosen. Other Waseda students are studying at Coe College (Iowa), Earlham College (Iowa), and the University of Oregon.

The Waseda program represents a first for Lawrence on several fronts. Normally, international students hoping to study at Lawrence must perform very well on the TOEFL test, which measures English proficiency among non-native speakers.

But for the Waseda students, Lawrence lowered the TOEFL requirements and will offer English as a Second Language for the first time in the university’s history. The students will spend most of their first term learning the language.

While the students will participate in Freshman Studies lectures and activities, their curriculum is a specially designed one.

As a result of the program, Japanese will be taught as a course at Lawrence for the first time as well. This addition will open up even more doors for East Asian Studies students at Lawrence.

While the students adjust to America and English, their hosts are coming in with almost no Japanese-speaking ability.

“I learned the Japanese word for ‘good morning’ yesterday, which is ‘Ohio’, just like the state,” said Brad Behrmann of his limited linguistic repertoire. Behrmann shares his Brokaw room with 23 year-old Mitschi.

Behrmann, a senior, was looking for something different than a single or a traditional roommate during his senior year, and looked forward to hosting.

“I spent a term last year abroad in London, and I really found myself wishing I could have lived with a host family,” he said. This year, he has a chance to help another student feel welcome.

Behrmann’s Brokaw neighbor, Jordan Webster, rooms with Hiroko Mori. Webster also spent first term abroad last year, in Spain. “I feel like I know what I would have wanted from a host roommate, and wish I would have had a Spanish roommate at the time,” Webster said.

The key to communication, all seem to agree, is patience and creativity.

Webster recalls talking to one of her friends’ Japanese roommates last week about the Beatles. The other girl had actually been to London, and to Abbey Road. But such cultural and linguistic touchstones also caused some humorous confusion between Webster and her roommate.

“We were walking by that coffee shop on College Ave. that had the shirt that said ‘Everybody Must Get Sconed.’ and I had to try and translate that. First I had to explain that it was a Bob Dylan song, and that ‘stoned’ was slang for marijuana, and then we had to translate the idea of marijuana,” Webster said.

“I’m trying not to speak idiomatically all the time,” she added, “but if I didn’t use any slang, then I wouldn’t be speaking like myself, and Hiroko wouldn’t get a good sense of how Americans really talk,” Webster said.

Waseda University has exchanged with Lawrence in the past through the ACM-GLAC, with small numbers of students from midwestern liberal arts schools going to Waseda, and vice-versa.

Takakazu Kuriyama stands out as a shining example of how beneficial a Lawrence/Waseda exchange can be. Kuriyama attended Lawrence during the 1950s, and graduated from Waseda. His experiences in Appleton undoubtedly aided him in his prestigious post as Japan’s Ambassador to America.

Kuriyama never forgot his American hosts, and in fact returned to teach at Lawrence as the 2000 Scarff Visiting Professor, sharing his understanding of foreign affairs with a generation of American students. After his public service, Kuriyama also taught at Waseda.

Rosenberg says the Kuriyama connection helps to provide a sort of familiarity between the two institutions. “[Kuriyama] has always spoken very highly of Lawrence, which I’m sure has helped strengthen relations between the schools,” Rosenberg said.

With many of the students studying International Relations, perhaps any one of them may turn out to be the next Kuriyama.