Early start times for construction behind Ormsby irritated residents to the point of petitioning for a later start.
Alex Lindgren-Gibson and Meg Schultz 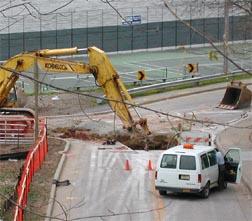 Early start times for construction behind Ormsby irritated residents to the point of petitioning for a later start. (Jessie Augustyn)

Over the past few weeks, the residents of Ormsby have been disturbed by the construction going on behind their building. The construction starts at 5 am, a time that, to the average college student, means the middle of the night. One of the ways the residents have decided to deal with the problem is to start a petition.

Complaints started coming in right after the construction started. The complaints have come mainly from the south side of the building, but almost everyone has been affected.

The main complaint is the noise. It is not a problem just for Ormsby residents. Students who have classes in Briggs have also been distracted by the noise.

Other problems with the construction are the dirt surrounding the building and the fumes. Many students who chose to live in Ormsby, which is a smoke-free building, did so because they are allergic to smoke. With the construction, their living environment has become less than ideal.

To address the problems, some residents started a petition. Their request was to move the start time of the construction ahead to 7 a.m.

When interviewed about the petition, the Ormsby Residence Hall Director, Corin Blanchard, said, “There are other avenues that might be more successful.”

Apparently she was right. The petition hung in the Ormsby lounge for a few days. When it was removed, the residents assumed it had been taken down and submitted.

This was not the case. The petition idea seemed to have fallen apart.

The petition has not been seen since. What has happened to it and the reasons the idea was abandoned are still unknown.