Poet Edward Hirsch amused and enriched the chapel crowd with his poetry and commentary.
Andrew Karre 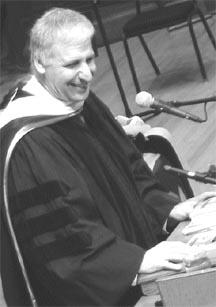 Poet Edward Hirsch amused and enriched the chapel crowd with his poetry and commentary. (Julien Poncet)

Poet, scholar, and essayist Edward Hirsch delivered the Honors Day convocation to a full Memorial Chapel on Tuesday morning. Before the address, President Richard Warch acknowledged the more than one hundred honors and prizes awarded to students, faculty and staff at a banquet on Monday night. He also presented Hirsch with an honorary degree, doctor of humane letters, thus, in his words, “evening the score” with Grinnell College, where Hirsch did his undergraduate and played football and baseball.In addition to holding a B.A. from Grinnell, Hirsch spent time at the Iowa Writer’s Workshop and received a Ph.D. from the University of Pennsylvania. He has published several books of poetry, criticism, and essays. Among the numerous awards he has accumulated, Hirsch was a recipient of a Watson Fellowship—an experience he described as crucial to his development as a poet—and a prestigious MacArthur Fellowship “genius grant.”

Hirsch’s address, entitled “Reading as a Relationship,” explored the ways that both he personally and the reader in general benefit from a relationship with poetry. Hirsch calls the reader an essential part of the poem, saying that the poem itself is “a message in a bottle” and only truly complete when someone, anyone, “finds the bottle.”

Hirsch stressed the importance of this relationship, both to him and generally. He suggested that the relationship between poet and reader actually precede the words themselves, and rises from a need for passionate communication.

Hirsch read a poem in progress entitled “Dates,” which represents his own reaction to the tragedies in New York, Washington, and Pennsylvania on September 11 of last year.

The speech included readings from his own verse as well as poems and excerpts from Whitman, Neruda, and a host of international poets, hinting at Hirsch’s own commitment to poetry as a pursuit without borders.