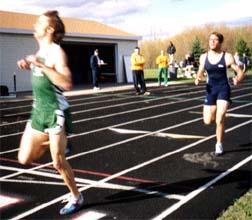 The Lawrence University men’s and women’s track teams fared well at last weekend’s Midwest Conference championship meet at Ripon College. The women finished third overall, and the men finished eighth.Senior Sally Schonfeld led the women. She was named one of the Outstanding Performers at the meet. Schonfeld won the 1,500-meter run and the 5,000-meter run, and took fifth in the 3000-meter steeplechase.

Junior Shelly Ebert continued her dominance in the 800-meter run. She won that race for the second consecutive season. She also is the two-time winner of the 800-meter run in the indoor season.

Sophomore Jess Moser took third in the 200-meter dash and eighth in the 400-meter run for the Vikings.

Junior Sarah Slivinski was the most versatile Viking at the meet. She placed in five different events. She took fifth in the javelin and the high jump, sixth in the 400-meter hurdles and long jump, and eighth in the triple jump.

Senior Lisa Tranel also scored valuable points for the Vikings by finishing fifth in the 1,500-meter run and sixth in the 3,000-meter steeplechase.

Senior Eric Davis also gained many points for Lawrence. He finished fourth in the 1,500-meter run, fifth in the 3,000-meter steeplechase, and eighth in the 5,000-meter run.

Freshman Steve Geisthardt finished off the Viking scoring by finishing eighth in the 110-meter hurdles.

The Vikings will be competing in a last-chance meet this weekend to try to have runners qualify for the National Championships next weekend at Macalester College in Saint Paul, Minnesota.