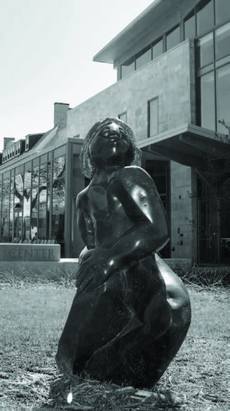 Lawrence is slowly introducing newly donated Zimbabwean sculptures to the campus landscape. The sculptures were donated late last December by David Barnett, a Milwaukee art dealer whose wife, Susan Frend, graduated from Lawrence in 1981. Barnett gave seven pieces of sculpture to Lawrence and seven pieces to the Appleton Art Center on College Avenue.
Two weeks ago, two of the seven sculptures were placed on Hurvis Crossing. Tom and Julie Hurvis selected the two sculptures for the bridge. One of the sculptures on Hurvis Crossing is titled “Resting Man” and was dedicated in memory of former Lawrence French professor Gervais Reed.
The two tallest sculptures were placed on the river walk below the Warch Campus Center. The river walk is expected to open later this spring, and sculptures created by studio art students will eventually be added to the path.
One Shona sculpture will be placed in Memorial Hall and the other two will be placed in the Wriston Art Center. One of the sculptures to be placed in Wriston, “Traditional Dancer,” was given in memory of Lawrence student Kaitlin Mahr.
All 14 sculptures originate from the Shona tribe, a large ethnic population in Zimbabwe. Most of the sculptures are composed of serpentine, though a few are carved from springstone. The seven sculptures that Lawrence received were crafted by seven different artists, and each artist carved his or her sculpture from one slab of stone.
Lynn Hagee, director of conferences and summer programs, explained that the sculptures have yet to be placed in these locations because of their weight.
“The sculptures are tremendously heavy,” Hagee noted. In order to ensure that the top-heavy sculptures are sufficiently anchored down, their bases, or plinths, must be increased in size. Hagee expects that the sculptures and their strong plinths will be introduced to Memorial Hall and the Wriston Art Center during the second week of May.
The sculptures’ history remains largely unknown. Director of Exhibits at the Wriston Art Gallery Frank Lewis explained that art and art history students will have the opportunity to research them for class.
“The works will be an exciting opportunity for students interning at the Wriston Art Galleries to research and study,” Lewis said. “These seven works are, at present, the only Shona works in our collection.”
Hagee, a Lawrence alumna who majored in studio art and art history, is excited for the new artwork. Hagee expressed her enthusiasm for the new river walk as well. “It is very important to me to have art not only within campus buildings but also outside,” she said.
“It’s great that we can be friends with the river,” she noted and explained that displaying art in a natural setting by the river will “add a whole new dimension to the campus.”
In the midst of numerous acts of vandalism on the Lawrence campus, however, Hagee expressed concern for the sculptures. After returning from a weekend out of town, Hagee had to peel posters off of the back of one of the sculptures on the Hurvis Crossing.
“[The Shona sculptures] belong to all of us,” Hagee said, and urged students to celebrate and respect the artwork “as well as everything else on campus. 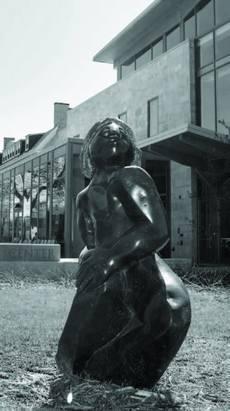