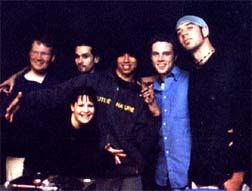 The EMC 2nd Annual Electronic Music Festival, which ran from May 8th through May 11th at Lawrence, ran the gamut from avant-garde, classically-influenced music to dance floor-inspired selections. On May 8th, Faust and Shortee performed in the Underground Coffeehouse, and several student composers (including the group Advanced Boating Quartet and a noise experiment group) performed in the Coffeehouse again on Friday night.

This year’s week-long festival had its ups and downs, with some events well-attended but the main event on Saturday poorly attended. This was largely due to rainy weather during the day’s Celebrate! festival, students at Lawrence leaving for mid-term reading period, and finals week for other colleges in the area.

EMC was founded last year by Lawrence conservatory students David Cutright, Dylan Jones, Jared Thomas, Hannah Trobe, and several others. The group came into being after discussions between Jones and Cutright about Lawrence’s traditional, classically-dominated music scene, and launched several projects last year to get new, electronic music performed and listened to on the Lawrence campus.

Jones and Cutright describe the club as having a “popular aesthetic with classical ideals” and want the Lawrence community to know that electronic music can be intricate, artful music, a far cry from shallow, stale “rave culture.” According to Jones and Cutright, EMC has three goals that have been central since its inception: to expose Lawrence students and the greater community to new music, to raise the standards for new music on the Lawrence campus, and to integrate new music into the conservatory curriculum. EMC members stressed this last goal, emphasizing their desire to resurrect popular music (which is now largely electronic) within a classical framework.

Several of the performers at this year’s music festival definitely fit into the club’s goals of having versatile and skilled new genre artists come to Lawrence. The duo Faust and Shortee (a part of Future Primitive Sound Collective), who performed with spoken word artist Christopher Longoria, are just one example. As the diversity of musical styles at the festival indicates, electronic music has hundreds of different facets.

Lawrence students may also remember EMC’s successful Winter Opener festival earlier this year and various Sonic Circuit’s video productions put on throughout this year and last. This year, EMC members have also taken trips to more academically oriented festivals: they attended the Sonic Circuits Festival in Minneapolis earlier in the year, and seven EMC members went to Iowa for the SEAMUS Festival last month. EMC members hope that attendance and participation in these respected and academic-minded festivals can add depth and focus to EMC in the coming years.

Although there is still a lot to take care of and wrap up this year, EMC is thinking about its future at Lawrence and ways it can try to unite musical genres that are often erroneously perceived as being too disparate to work together. EMC plans to continue to hold an annual music festival and also hopes to get more involved in academic events in the conservatory. Also, they will be working towards more recognition, through exposure like their recent front-page appearance on the Appleton Post-Crescent’s Entertainment section. They are always looking for new members who are interested in promoting new music at Lawrence.

As a new and promising group, EMC hopes to be involved in music at Lawrence for the long term, and is serious about working towards the goals the club was founded upon.