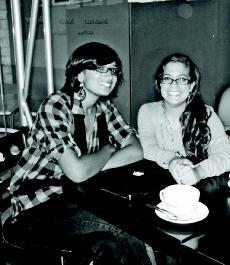 Madhuri Vijay ’09 was one of 40 national recipients of a $28,000 fellowship from the Thomas J. Watson Foundation. The grant supports a year of independent study and travel outside the United States to research a topic of the student’s choosing. Vijay, who hails from Bangalore, India, is currently using her fellowship to visit different parts of the world and explore the lives of Indians like herself who have left their motherland behind. This is the second installment in a four-part series that will document her travels.
Let’s say this is true. Two student researchers, Madhuri Vijay and Laila Zomorodian, working in different parts of Tanzania, are cyber-introduced by their mutual friend from home. After a lovely first date on the phone, they realize they are both planning to go to Uganda for their respective work. They decide to take their budding friendship one step further and meet in Kampala, Uganda’s capital city. They travel separately, and their vastly different roads to Uganda epitomize the refrain of all world travelers: you can only plan to a certain extent. The travel gods have minds of their own; sometimes they smile kindly upon you, and other times, they’re just pissy.
Madhuri, who is traveling first, flies from Dar es Salaam to Mwanza, Tanzania, where she spends the day as a tourist, taking in the scenery and watching the sun set over Lake Victoria from a rooftop restaurant. Later in the evening, she boards an overnight ship crossing the lake. She makes friends with the girls in her compartment, watches the water for a while and then falls asleep. The ferry arrives at Bukoba early the next morning, and Madhuri and her new friends go to the bus stand, where they catch a bus to Kampala. After seven relatively comfortable hours, Madhuri arrives in Kampala, where a driver and a car are waiting to receive her. She texts Laila, who is about to get on her plane from Arusha to Mwanza: “Safe in Kampala. Ferry lots of fun. Bus easy. See you kesho.”
Expecting to repeat Madhuri’s itinerary, Laila lands in Mwanza a day later, only to find that the ferry to Bukoba leaves every other day, and this was not her lucky day. She rushes to the bus stand
to discover that the only bus to
Kampala has departed 15 minutes
prior. Stuck in Mwanza, she
books a room at the cheapest
hotel she can find, the Lake Hotel
Limited, whose indeed limited
facilities include a seatless toilet,
a dripping tap and a door with a
habit of locking her out.
After an uncomfortable night
in the Mwanza heat, Laila returns
the next morning to the bus
stand, only to be told that there
is, in fact, no bus to Kampala.
The furthest she can get, she’s
advised, is to Mtwara – which
to this day, we’re still not sure
exists. Left with no choice, Laila
gets on the bus, heading toward
Uganda. At the border, however,
the driver turns back around,
ignoring Laila’s cries to “Shusha,
shusha!” and she is forced to
jump off the moving bus. At
which point, she finds herself
stranded at the border.
She goes to the immigration
office, buys her Ugandan visa
and asks when the next bus to
Kampala is leaving. The visa official
looks blankly at her and says,
in Swahili, “There is no bus to
Kampala today.” He also mentions
that there is a shanty guesthouse
some ways away, but no
ATM for her to withdraw Ugandan
shillings. After Laila sheds a few
tears, he grudgingly changes $30
into shillings for her.
The sun is about to set, and
Laila is contemplating the extent
of the immigration officer’s generosity:
how much room, after all,
could a five foot tall girl take up
on the floor of the immigration
office? But she finally locates a
taxi, already crammed with nine
other people, and sharing the
driver’s seat, hoping now only
to get as close to Kampala as
possible.
The driver, who has said he
will take Laila to a town called
Masaka, apparently finds something
better to do, because he
changes his mind and dumps her
near a daladala, telling her it will
take her to Masaka instead. At
this point, Laila’s phone service
realizes she’s in a different country
and promptly stops working.
With no phone, very little money
and a daladala driver who keeps
asking to marry her, Laila’s trip is
getting better and better.
Realizing that the last thing
she’d said to Madhuri was, “I’m
going to take a taxi from the
Ugandan border. I’ll call you from
wherever I end up,” Laila figures
she should try to get in touch
with her friend. She asks to use a
fellow passenger’s phone to send
a local text message, but being
devoid of any discernible compassion,
he refuses. At Masaka,
she gets off the daladala to hear
a familiar line: there are no more
buses – or taxis – to Kampala
that day; she is going to have to
spend the night there.
Things begin to turn around
when a Ugandan lady, the only
person in the vicinity with a heart
larger than a peanut, befriends
her, offers her a phone and
invites her to a friend’s place.
They spend the night in the house
of a German lady who keeps
a duck and a cat for pets, and
the next morning Laila gets on
her third bus, this time actually
bound for Kampala. From
the bus stand in Kampala, she
takes a bodaboda, or motorcycle
taxi, and finally meets Madhuri
in flesh and blood, 52 hours after
she began her journey. Which, we
feel compelled to point out, is
probably longer than it takes to
fly around the world… twice. 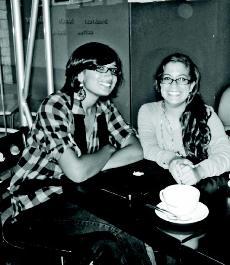