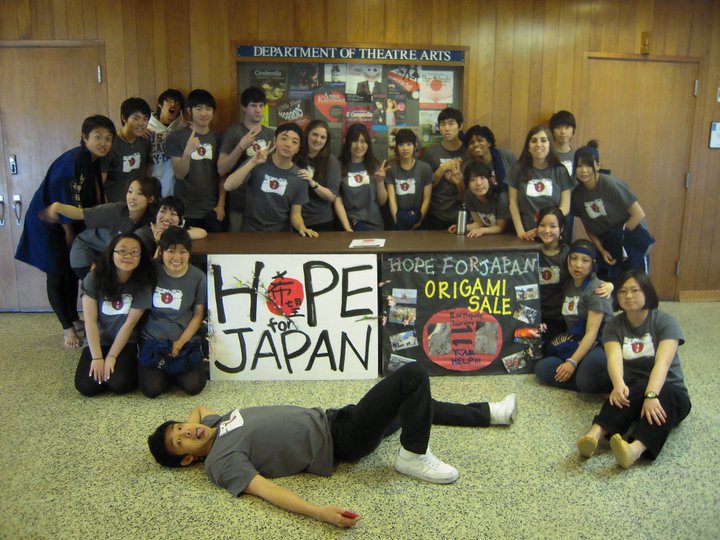 As many know, Japan experienced a massive 8.9 magnitude earthquake March 11. Followed by a destructive tsunami, the earthquake has left countless people in need of support and aid. Although it happened nations away, the aftermath of the earthquake has been felt on campus.

During spring break, student Sae Goto went home to Tokyo Japan, where she witnessed the earthquake’s shocking effects. Because Tokyo was not one of the areas hit, Goto was surprised by how much it had been impacted. Trains were shut down everywhere, and everyone experienced severe electricity shortages after the nuclear plant explosion. Said Goto, “We had the televisions off so that we could save energy. We had the radio on for the whole entire day. Whenever there was a really big earthquake, it reached Tokyo in a minute or two and the house would begin shaking. There were at least two 3-magnitude shocks.”

Knowing that she would be returning to Appleton after spring break, Goto began planning relief efforts to bring to the Lawrence community. While still in Japan, she launched a Facebook group to brainstorm ideas with other Lawrence students. Once Spring Term began, Hope for Japan was immediately established.

Rather than spreading the sadness and devastation of the Japanese earthquake, Hope for Japan aims to promote just what the group’s name suggests-hope. Said volunteer Shallion Dixon, “People know that Japan got hit, but we want people to know what Japan is and to learn about it.” The group’s goal is not simply to collect donations for relief efforts, but also to raise awareness about Japanese culture and bring attention to the fact that there is hope.

For two weeks, Hope for Japan collected donations by the entrance to Andrew Commons. As a token of appreciation to donors, origami and Japanese snacks were distributed. “I think it’s part of our culture of not just taking but also showing appreciation and giving back,” said Goto.

The group also performed at the LI Cabaret, singing two significant Japanese songs. One, “Winding Road,” is a song about being positive and hopeful for what is coming next in the long road ahead. The other, titled “Beyond the Night Sky,” was a song that survivors of the earthquake listened to in areas that were badly struck. According to Goto, the song was tweeted online after the earthquake, reminding others to look at the night sky for hope.

On Earth Day, Hope for Japan also set up a booth in the campus center fair. They provided face-painting, opportunities to try on traditional Japanese clothing and lessons on making origami cranes.

Hope for Japan has received a lot of support from student organizations and Lawrence faculty. Said Goto, “We’re really thankful that although this is something concerning Japan, there are people involved who are not just from Japan… It really means a lot to us that many people are taking part. It shows that it isn’t just the Japanese people who are concerned.”

For the remainder of the term, Hope for Japan will hold more events, providing Lawrentians with more opportunities to actively take part in relief efforts. The events are as follows:

Tentative events also include collaboration with Bon Appétit to serve Japanese cuisine at the global foods section of Andrew Commons, an open mic night at Harmony Café and a collaborative house party or barbeque with SigEp.

Although all events are free, there will be opportunities to donate at each one. Interested in volunteering at Hope for Japan events? Contact Sae Goto at sae.goto@lawrence.edu.