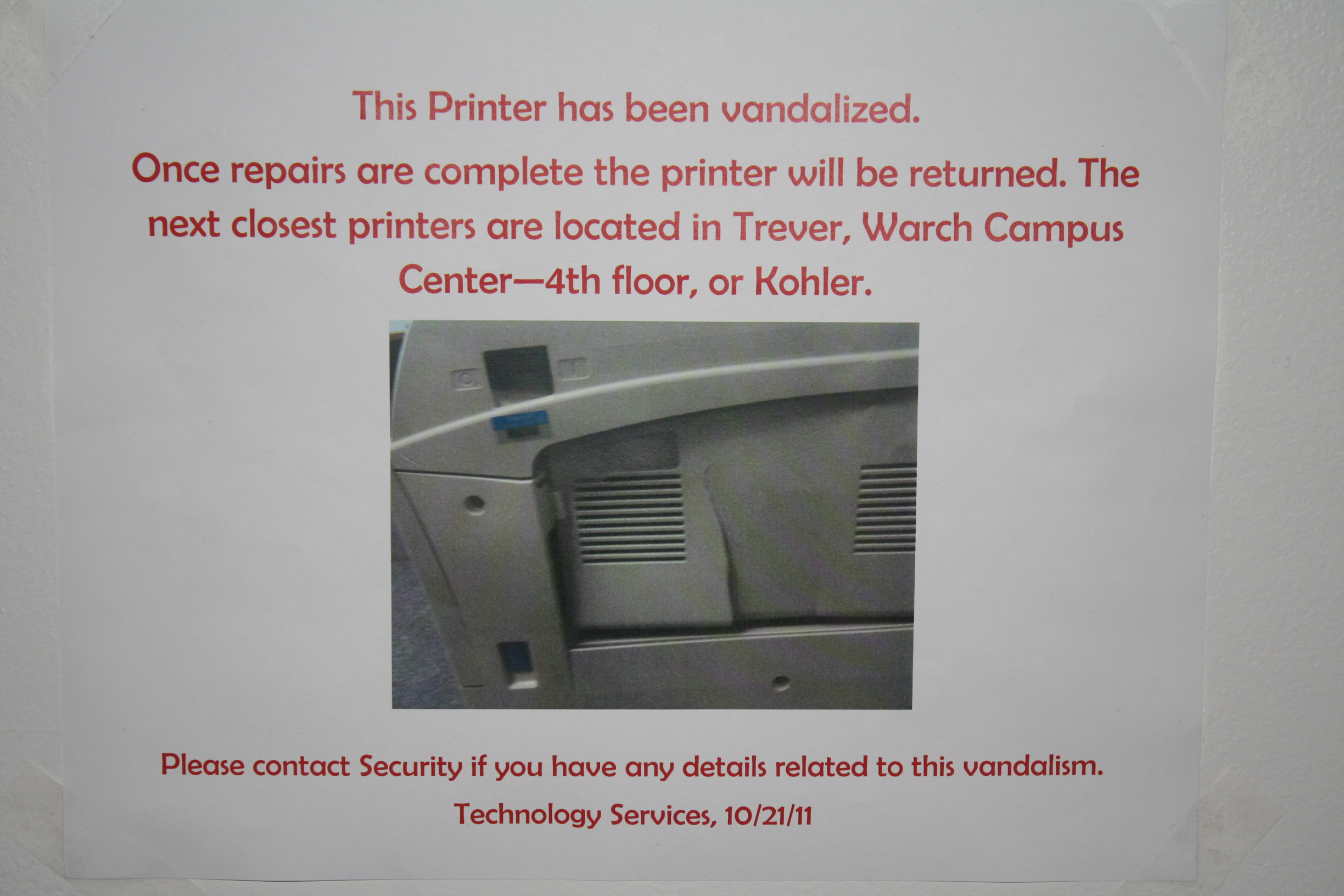 In recent weeks, Sage Hall has been victim to numerous acts of vandalism. Most recently, the computer lab printer was destroyed beyond repair and derogatory graffiti was etched into a pressing room door.

Additionally, towards the beginning of the school year, a hole was kicked into a wall on the fourth floor, a desk chair was ripped apart and destroyed, garbage cans have been tipped over into the hallways on multiple weekends, glass bottles have been dropped in the stairwells, a ceiling light was spray painted and posters and door decorations have been ripped down.

It is still unclear who has been committing the acts of vandalism. Many Sage residents have expressed concern that much of the destruction has been caused from the guests visiting Sage. While posters being ripped down and clean ups after weekends aren’t uncommon in other residence halls, no other halls this year have experienced such vandalism to the extent and consistency that Sage has.

In response to these incidents, over a third of Sage residents attended a community meeting last week to talk about and confront the vandalism. The idea of a neighborhood or community watch was brought up, and residents signed agreements stating they would confront somebody or call an RLA, the RHD on duty or security if they witnessed any incidents occurring.

Due to the costly nature of the vandalism and the fact that nobody has confessed to the acts, the possibility has been raised that all Sage residents will have to split the costs to cover the repairs.

“A lot of people believe, and I totally understand where they’re coming from, that it’s not fair to be charging folks that didn’t commit the acts,” said Sage Residence Hall Director and Student Organization Coordinator/Greek Advisor Rose Wasielewski. “But unfortunately, few people have come forward about any information about what’s happening, and I strongly believe that a lot of the things that have happened, people might have heard them happening at the time.”

Henriques also commented, “Obviously I’m upset that I have to be financially responsible for damage I did not cause. But there really isn’t any way around it if nobody comes forward, so I can’t say I’m surprised.”

Splitting payment for the damages can potentially be avoided through the community watch program and Sage residents themselves taking action. By also highlighting the positives in the community and emphasizing the importance of guests within that community, Wasielewski and Associate Dean of Students for Campus Life Amy Uecke noted a shared hope that Sage residents can find the self-empowerment to take over their living environment and stop such vandalism.

Said Uecke, “There are many, many more students who do not agree with the kind of things that have been happening, and now, I hope, feel like they have a voice to be able to say that I’m not going to allow this to happen in my community.”

A few years after Hiett Hall’s construction in 2003, a similar series of acts of vandalism occurred. According to Uecke, Hiett residents greatly valued what the hall had to offer and were outraged about what was going on. The Hiett RHD at the time called the community together, and the residents worked together in order to prevent such destructive behavior and completely turn things around.

Wasielewski added, “This is not just a Sage building, but this is a Lawrence building and everyone should hopefully be respecting that.”

Wasielewski encouraged any students who have comments or concerns or would like to help with the community watch program in Sage to contact her.