Despite losses, no loss of morale 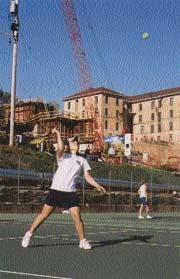 Yet if you think that a last place ranking and a record equivalent to last year’s disappointing season might have an adverse affect on morale, you’re sorely mistaken. “We just had a lot more fun this year because all of the girls [on the team] are so close in skill level,” said sophomore Justine Reimnitz, adding that a lack of major discrepancies in skill level among the players afforded them a sense of equanimity.

When pressed whether it was perhaps because LU lacked one or two high-caliber players that could jump start the team toward a winning record, Reimnitz offered, “The nature of Division III play is that you’ll get players who are nationally ranked and could play Division I. Yeah, we could definitely use that, but it’s not going to stop us from going out there and playing hard.”

Despite the poor record the last few years, LU is poised to make a move next year with the return of Meadow Brennan, who is currently studying abroad, and the addition of possible recruits. Of the eight players on this year’s roster, half were new additions to the team. With two promising freshmen, Liz Bullock and Melanie Farley, look for Lawrence to finish if not near the top, then at least significantly better than this season.

The Vikings will play in the Midwestern Conference Championship consolation match Oct. 12-13 in Madison, with doubles matches on Saturday and singles matches on Sunday.