Reverend William Sloane Coffin, a veteran of peace and justice activism, spoke on Tuesday to a packed Memorial Chapel about his thoughts on the current presidential administration, global feeling towards the U.S., and other pressing issues.
Peter Gillette 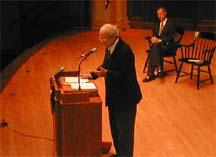 Reverend William Sloane Coffin, a veteran of peace and justice activism, spoke on Tuesday to a packed Memorial Chapel about his thoughts on the current presidential administration, global feeling towards the U.S., and other pressing issues. (Sandi Schwert)

The Rev. William Sloane Coffin, peace activist and former Yale chaplain, returned to the Lawrence chapel stage to deliver his fourth convocation, the second of the 2002-2003 series, entitled “The U.S., Iraq, and Nuclear Weapons.” Coffin has given three Lawrence convocations, and he spent 1995 as the Stephen Edward Scarff distinguished visiting professor of Religious Studies.

During a question and answer session in the early afternoon, Coffin outlined his life trajectory, which led this anti-war activist from a four-year stint in the army to protesting segregation in the South. He then went on to Yale, where he served as chaplain and was on the frontlines of opposition to the Vietnam War.

In 1979, Coffin was one of five clerics allowed to celebrate Christmas with the hostages in Iran. During the late 1980s he became president of SANE/Freeze, now called Peace Action, which is the largest peace and justice organization in the United States.

Coffin’s convocation Tuesday addressed Sept. 11, the Bush administration’s reactions to the events, his disagreement with the U.S.’s proposed war on Iraq, and his speculation as to how the Arab world would react to such a war.

Coffin opened by defending the place of doubt and dissent in both society and religion. He criticized the Bush foreign policy team—namely Bush, Vice President Dick Cheney, Defense Secretary Donald Rumsfeld, and National Security Advisor Condoleeza Rice—for failing to question their own actions and motives.

“They have as much give and take in their minds as a terrier has to a rattle,” Coffin quipped.

Coffin criticized America’s angry reaction to Sept. 11, saying that while Bush initially showed great leadership in proclaiming his commitment to justice, al Qaeda should have been pursued “not by the law of force, but by the force of law.” Coffin asserted that America should recognize the need for international law.

The cry for revenge has been prevalent among citizens, Coffin said, because “too many Americans have experienced the surge of self-righteousness that comes from being unfairly hurt… The strongest nation in the world [has] succumbed to victimhood.”

Coffin called all in attendance to educate themselves, replacing ignorance with an understanding of why those in other parts of the world hate America. Among the reasons that many hate America, in Coffin’s opinion, are America’s partiality to Israel, the effect that market capitalism has on the poor throughout the world, and U.S. support of dictatorial allies.

Americans’ ignorance of those worldviews, he said, leads to fear, then anger and the vengeance that many Americans now want to project outwards.

But a war in Iraq, in Coffin’s opinion, would consolidate opinion against the U.S. and give al Qaeda fertile soil for recruitment.

Furthermore, Coffin outlined the difficulties of trying to instate democracy into a country of three different groups: the Kurds, the Sunni Muslims, and the more fundamentalist Shiite Muslims.

Coffin also echoed a popular sentiment of those who oppose U.S. unilateral action in Iraq, saying that Jordan’s leader told CNN the proposed war was “ludicrous.”

“It strikes me as incredible that [Hussein], as intent as he is on staying in power, would take on a country that would wipe his out,” Coffin said. He added that Hussein’s army was well tested during the Iran-Iraq conflict, and would be defending their own soil. What’s more, an attempted regime change could lead to urban fighting and untold civilian casualties.

Coffin considers the Palestinian-Israeli conflict the higher priority, and says America and its allies should keep searching for a useful solution.

Many of Coffin’s most impassioned words were reserved for the topic of nuclear proliferation and the need for global disarmament, even if that means that the U.S. takes the lead unilaterally.

The Cold War model of nuclear balance no longer addresses the needs of a world with so many superpowers, Coffin said. He also placed the nuclear issue in a higher context: “God alone has the authority to end life on earth. All we have is the power…[The threat of nuclear war] must be seen as an abomination to God.”

He also criticized the proposed “Star Wars” missile shield, saying “[Bush] wants to spend millions and millions of dollars on a nuclear shield, when the enemy is not a rogue state but a bunch of stateless rogues,” who would more likely come by air or boat than by intercontinental ballistic missile.

Coffin called on the youth to carry on banners of dissent. “This has disrupted your complacency,” he said.

Coffin stressed the need to confront 21st century problems with 21st century solutions, evoking famous words from Abraham Lincoln’s 1862 address to Congress: “The dogmas of the quiet past are inadequate to the stormy present. The occasion is piled high with difficulty, and we must rise with the occasion. As our case is new, so we must think anew and act anew. We must disenthrall ourselves, and then we shall save our country.”

Very rarely do convocation speakers interrupt their closing, standing ovation to add a piece of information, but Coffin stepped up to the mic as the crowd was still applauding to provide the audience with the White House’s phone number.

“If you call, an operator will answer, and you say, ‘I’m very much in favor of the war’ or ‘I’m very much against it.’ But do call,” Coffin concluded.