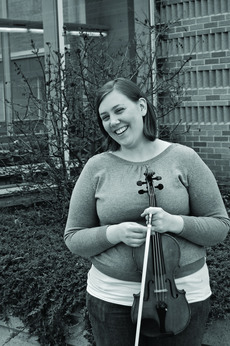 Not many would program Vivaldi and Gershwin next to each other at a recital – it’s a bold move – but that is exactly what super-senior Katie Ekberg has done. Ekberg is currently pursuing degrees in violin performance and French while also managing to fit in a minor in gender studies.
Ekberg’s foray into music started in what she calls the “inauspicious beginnings” of fourth grade orchestra. From there she’s come quite a distance, playing in the Lawrence Symphony Orchestra, the pit orchestras of Lawrence operas and musicals and even Lawrence’s Gamelan ensemble. She even performed on Wisconsin Public Radio with her string quartet as winners of the Neil Silva Competition in 2008.
Ekberg’s eyes get a little dreamy when she talks about performing with her string quartet. “Oh!” she giggled, when I commented on it, “Well… I really like that you’re able to work so closely with other people. In a string quartet you can really make your own decisions and it’s very self-directed. It’s a real learning process because you learn from other peoples’ playing and learn a lot about your own playing.”
Sometimes having majors in both the Conservatory and the college can be a strange mix, but Ekberg says that the combination has actually helped her: “I just learned how much analysis of text in French or gender issues can apply to music. I used to just hack through a piece but now I’ve started analyzing what my hands and brain are doing as I go through the piece, just like I would with an academic text.”
When I asked Ekberg what her best musical experience at Lawrence has been, she exclaimed, “Well I’m hoping it’ll be my recital!”
Ekberg’s senior recital is coming up Wednesday April 14 at 8 p.m., and all signs point to an awesome and diverse concert. Ekberg will be playing Fauré’s “Sonata in A major” and “Autumn” from Vivaldi’s “The Four Seasons” with her string quartet. Additionally, she will perform preludes by Gershwin originally written for piano but rearranged for violin and piano.
After Lawrence, she hopes to go to graduate school, get her DMA, and eventually teach at a university level. “So that’s my big plan,” she laughed. “Stay in school as long as possible, then teach in one!”
Ekberg’s effervescent personality is sure to come out in her playing, so make sure this recital makes it onto your Wednesday pre-senior night dossier!