Did you check out Octoberfest 2002? 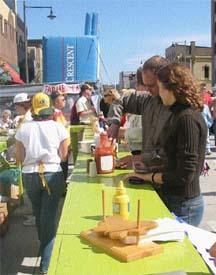 Over 100,000 people packed College Avenue last Friday and Saturday for Octoberfest 2002. The annual event, touted as a “Mile of Fun” by its promotional website www.appletondowntown.org, drew a crowd of Lawrence students, locals, and visitors. Setup for the massive event got underway Friday afternoon, as College Avenue and the Main Hall green filled with arts and crafts booths, vendor tables, and food stands.

Festivities began on Friday night with License to Cruise, in which classic cars lined College Avenue west of Drew Street. The popular opening act event to Saturday brought 40,000 people to the Ave.

Over one hundred non-profit organizations ran booths, offering a variety of food from popcorn to funnel cakes, root beer to beer.

Live music played from five stages, including one next to the Memorial Chapel. Local bandVic Ferrari headlined the performers this year.

Local shops remained open for business, taking full advantage of the increased crowd. Other enterprising groups profited as well, such as the youth groups from churches in the area that raised money by allowing visitors to park in their parking lots.

To accommodate for the increased number of people on campus, residence halls were locked, accessible only to those carrying a star key. The Conservatory of Music was also locked, though dedicated students could enter via a single door guarded by door monitors.