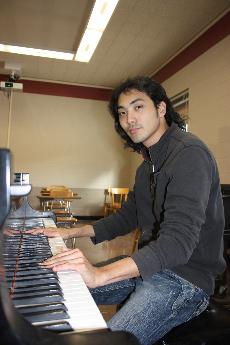 When Sunghun Cho takes the stage in Harper Hall Saturday afternoon, Oct. 2, to present his senior recital, he will showcase not only his piano skills, but also the lessons he’s picked up studying voice and economics.
Cho, a native of South Korea, matriculated in 2005 and studied on campus for his freshman and sophomore years, but then had to leave to serve in his country’s army. He worked as a field medic and had almost no time with a piano over the course of his duty.
When Cho came back to Lawrence, he jumped right into a practice room and now is ready to give his recital.
Cho’s recital, which begins at 3 p.m., features a tribute to Chopin, who is being widely celebrated this year on the 200th anniversary of his birth. Cho will play both Chopin’s Sonata No. 2 in B-flat minor and his Ballade No. 3 in A-flat major. Works by Mozart and Liszt are also on the program.
One piece that Cho is particularly excited about is a work by Nikolai Kapustin, a Russian composer who combines classical elements with jazz.
To people without a strong knowledge of piano repertoire, these names may not mean anything. However, said Cho, “I think that this will be an exciting program for people who aren’t typically exposed to classical music, and it might even get them hooked.”
If you notice some beautiful phrasing in the music on Saturday, that might be attributed to the voice lessons that Cho has been taking with Bryan Post. Cho says the time focused on singing has opened up his musical perspective.
Cho is also pursuing a Bachelor of Arts degree in economics. But this instruction has also been beneficial to his piano playing.
“I’ve learned to maximize my utility to be productive while practicing, and a ‘Pursuit of Innovation’ course helped me focus more on efficiency in movements while playing,” Cho said.
A combination of maturity and extra areas of study have led to an evolution of his focus while studying piano.
Cho commented, “As a teenager, I concentrated on playing every note perfectly, because I wanted to be famous.”
He has since abandoned the quest for perfection and now focuses on taking his musical strengths and limitations and doing the best he possibly can. Having fun while making music is now on the front of Cho’s mind, and he is looking forward to sharing this joy with others on Saturday. 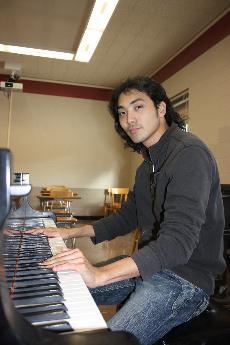