&Slik Rik& Warch pictured with some of his homies from RUN DMC.
Chris Worman
Despite his claims, not “All that.” 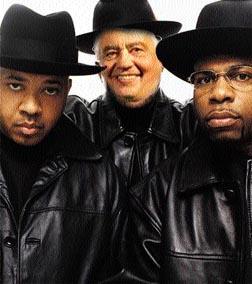 &Slik Rik& Warch pictured with some of his homies from RUN DMC. (Chris Worman)

Inspired by Harvard Black Studies Chairman Cornel West, who released a rap album last year entitled Sketches of My Culture, “Slik Rik” Warch has decided to get back in touch with the streets on his debut release for Bad Boy Records, Sketches of My Erudition.“In the great oral tradition of the Greeks, and where it intersects with storyteller archetype that permeates the greatest of Eastern and African art, I believe that a simple, repetitive beat allows the greatest pedagogical framework for the lessons of the classroom…And the street,” said Warch.

Warch seized the idea for the mixture of postmodern (non-relative) intellectualism and cold-ass portrayalz of the jiggy-hooch aesthetic about ten years ago, just as popular hip-hop began to rise counter to the grunge revolution—when youth of all races and socio-economic classes began to seriously rebel against the somewhat selfish excesses of the post-sexual revolution era in the American family.

Adopting his new moniker in the tradition of Run DMC, “Slik Rik” has acknowledged that “old school mofos still deserve props, even if us new thugs done glock dey ass back to Motown inner-city stereotypical irrelevance.”

In 1993, Warch worked with the young producer Sean “P. Diddy” Combs to cut his first single, “Pimpin’ with Plato’s Posse.” The chorus pumped a phat beat, and the words were fly and distinguished: “What is justice?/Bitch don’ trip/ Thrasymachus, you whack/so let’s do the dip d’ dip/ Don’ tell me bout’ advantage/ Don’ tell me bout’ Plutarch/ Your mama so fat they wouldn’t let her/ with the animals on Noah’s ark.”

Henry Louis Gates, Jr., who contributed heavily to the liner notes, heard the album and was thrilled. “Finally! Someone has summed up the intelligent black tradition!” But then, Warch’s debut included a shout out to Biggie Smalls, who had been shaking the status quo up for da East Side gangstaz, and Combs. Then Biggie and ‘Pac got capped.

“I didn’t want to get caught in the crossfire, bein’ in the middle with all dis shit goin’ crazy. It’s analogous to Rommel’s Pincer moves, leaving the Allies all but stranded until Patton brought relief. I was in the Detroit scene then, but Dre, he ain’t exactly got my back,” said Warch.

“And you know when Dean Rosenberg and the Trusteez trip like they my homies til’ the end, dey be front,” he continued. “I think it’s important to have honesty and ethics in public discourse.”

Now that West has taken the initial heat, Warch is ready to be heard. The remix of his album includes a tribute to the rap wars, “Big n’ Pac (When will the killing stop?)” and a shout out to God, “Eternal Immutable BackGetter.”

“All I can say is that I hope people understand my world better, and my pain,” he concluded. Then he went and read Virgil.

The album will hit stores May 1, and all proceeds will be used to renovate the President’s house.