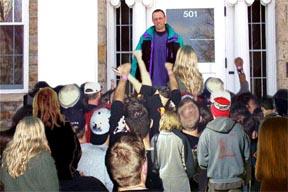 A spontaneous protest broke out on Friday afternoon when a source in the dean of the faculty’s office revealed that the university had not hired any new male professors from foreign countries between the ages of 27 and 40 with body fat percentages of less than six percent and excellent hair.A large number of university women, including members of DFC, the sororities, the Quad seraglio, as well as dozens of female English majors led a crowd of over 400 to the steps of Samson House, where they chanted “We want hot Polish professors! We want sexy Latin American lectures!” until finally Dean Rosenberg was able to locate Professor Orr, whose strong yet gentle British accent soothed the crowd with an aloof, yet humorous utterance.

A number of the marchers spoke to The L wrenthi n.

“Once again Lawrence has failed to meet our needs,” said Hedda Gurlbaum, a sophomore. “While the number of women on campus is rising steadily, the number of hot foreign faculty members is stagnant at best. Whom are we supposed to have sweet but harmless crushes on?”

Students are hopeful that examples such as Gustavo Fares will be repeated,“We’re very happy with Gustavo Fares [head of the Spanish department], very happy,” said Jessie Augustyn. “Did you know he’s an artist too? What a dream!”

The problem appears to be with numbers and diversity. “But as far as a representative sample is concerned, LU is way behind,” added Augustyn. “You can’t expect us all to be happy with just Latin American men. Eastern Europe, for instance, is now woefully underrepresented.”

“We like Professor Katz,” said Laura Guili, “and we are fascinated by his insights into Czech music and culture, but I think he’s from Kansas or something. He doesn’t even have an accent and he wears Dockers every day.”

Professor Katz later confirmed that he had received several anonymous campus mailings suggesting that he grow a beard and adopt a Slavic accent. “I don’t know what to say,” said Katz, “I lift weights and play racquetball, but this is too much.”

Dean Rosenberg was surprised by the protest and promised the university would make changes.

Hot conservatory professors have historically been in poor circulation. Rosenberg said in the future they will be required to park in the lot below Briggs in the morning and walk to the conservatory. They would also be asked to lunch in the Grill three times a week. As a stopgap measure, all sabbatical replacements for next year will come from the University of Madrid and will be scouted by the Ford Modeling Agency. Rosenberg suggested that body sculpting might be added to a course of faculty enrichment.

Rosenberg also volunteered to switch to an all black wardrobe and start smoking.

Professor Dane Richeson offered himself as a substitute for any anonymous, fawning, unrequited crushes. “My middle name is Maxim, and that’s pretty exotic,” he said.

Professor Jeff Clark pointed out that he had very sweet Labrador puppies that he walked regularly.

“This is blatant ageism!” railed Professor Goldgar, who claimed to have been wearing berets for 40 years. “And I’m from the South, which is practically a foreign country.”

He added the Professor Hah was also a victim of this discrimination. “He is a very snappy dresser,” conceded one student.

“On the up side of all this,” added President Warch, “we’ve been looking for a less arbitrary hiring and tenure policy that would please the majority of the students, and it looks like this one is at least as good as the previous one. We’re also considering adding a swimsuit calendar to our recruiting materials.”