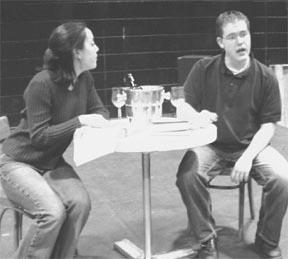 We’ve all heard the phrase “Change with the times,” and that’s exactly what this year’s student produced stage production of She Loves Me has done. There have been so many different versions of this plot over the past seventy years that it is hard to keep track. But each new version has found a place in the heart of its new audience. Adaptations allow plays to be changed to fit a new generation, style, or event. This spring’s musical production, She Loves Me, is the perfect example of the evolution of a stage show.

Many shows are based on adaptations of other plays, books, or familiar plots. The original plot line for She Loves Me was written for the play Parfumerie by Miklos Laszlo, a Hungarian playwright and author. Later it was adapted into screenplay form for the 1940s film The Shop Around the Corner, starring Jimmy Stewart, and an MGM musical In The Good Old Summertime, starring Judy Garland. In 1963, well known musical authors Sheldon Harnick and Jerry Bock, who a year later went on to write the acclaimed Fiddler on the Roof, produced She Loves Me.

The show takes place in the 1930s at a perfume shop in Budapest. It follows the hopes and beliefs of the employees of the store, but focuses on the confused romance between the two main characters, Georg and Amalia. Their plot twists may be familiar to any movie lover, as the film You’ve Got Mail, the newest adaptation, closely follows the romantic pen-pal relationship between the two characters. Unbeknownst to each other, the conflicting colleagues have been writing secret “dear friend” letters back and forth and slowly falling in love.

Full of comic twists that continue through the show, the two characters run through a full spectrum of emotion. With supporting plots involving the other workers from the shop and musical selections giving insights to the characters’ thoughts, the production provides a well-rounded show, regardless of the familiarity of the plot and its many different versions.

Lawrence’s production of She Loves Me is being planned, directed, and produced by students. These student produced shows give seniors a chance to be involved in many different aspects of a show’s production, and many students use this experience as part or all of their senior honors project.

She Loves Me runs from Thursday through Saturday, April 25-27, at 7:35 p.m. in Cloak Theatre. Tickets are on sale now at the box office. Prices are as follows: Adults $10, senior citizens and students $5, LU students/faculty/staff free. (LU students/faculty/staff will want to reserve seats beforehand to guarantee availability) Contact the LU Box Office at 832-6749 for tickets or information.