An ancient world is underground in Orvieto, Italy. Claudio Bizzarri presented his archeological discoveries in a lecture April 3.
Rachel Hoerman 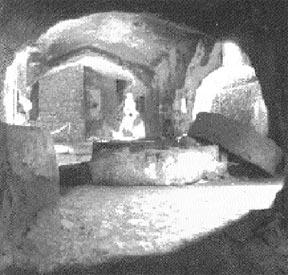 An ancient world is underground in Orvieto, Italy. Claudio Bizzarri presented his archeological discoveries in a lecture April 3.

Foreign professor Claudio Bizzarri explored the intrigue of the underground in an April 3 lecture at Wriston Auditorium. The Archaeological Institute of America sponsored the lecture, entitled “Evidence of the Past in the Underground Structures of Orvieto.” Bizzarri, a professor at the University of Macerata, specializes in the fields of Etruscan, Greek, and Roman architecture and trade relations between the three cultures.Bizzarri’s lecture focused on discoveries from his research in the uniquely situated hill town of Orvieto, Italy.

Located in the central province of Umbria, a place characterized by its rolling hills, steep cliffs, and rocky terrain, Orvieto crowns a plateau of volcanic rock surrounded on all sides by vertical cliff faces. Bizzari noted that such positioning made the city “a perfect natural fortress” and allowed for unusual developments over the ages both within and underneath the city’s walls.

Occupied from the 9th century B.C.E. onwards by the Etruscans and then by people conquered and incorporated into the Roman melting pot, the present-day town of Orvieto pales in comparison to its past glory. Though the original Etruscan city was sacked and razed by the Romans in 264 B.C.E., clues to the city’s structure, organization, and culture remain beneath its ancient ruins.

Under Orvieto are complex systems of underground tunnels, wells, buildings, caves, and catacombs containing everything from pot shards to human skeletons. The cave networks alone are an astounding testament to the craftsmanship and ingenuity of the Etruscans. The intricate system carved out for wine cellars, pigeon keeps, grinding areas, and milling areas comprises over 2,000 caves beneath Orvieto. Of those, 640 have been catalogued and mapped.

The tunnel system beneath Orvieto was organized at more than one level and served to meet the water needs of the people, as well as connect the various caves and catacombs. Excavations have unearthed Etruscan masonry, which utilized a variety of materials to provide the people with aqueducts and wells, storage areas, and garbage pits within the protective walls of the city.

Beyond the city walls lies a fertile countryside of rolling hills and ancient farmsteads, interspersed with and atop necropolises, or tombs. Within such tombs, Bizzari and his team have discovered various grave goods, such as pottery, ceramics, jewelry, and tools, which point to the material culture of the Etruscans and to their extensive trade relations with artisans in Greece and Rome.

Bizzari has made several discoveries within the city walls that hint at the daily life of the Etruscans. Millstones, ceramics, aqueducts, and wells point to a culture of skilled artisans, farmers, and craftspeople with extensive trade relations. Garbage pits and pot shards also provide basic information about daily living. As Bizzari notes, “There is very little that can make an archaeologist happy like a garbage pit; its contents are like treasures.”

Though several of the underground spaces of Orvieto have been discovered and explored due to erosion, landslides, and cave-ins, Bizzari estimates that many of Orvieto’s underground structures have already been lost due to the falling away of cliff side along the plateau’s rim. Many others have yet to be uncovered. “The plateau is like a huge artichoke ripening, opening along the edge, and cracking,” states Bizzari. “As the leaves of the artichoke–the cliff–detach and fall away, underground structures become apparent.