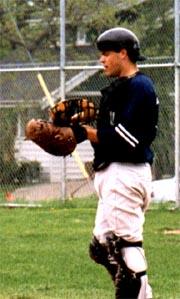 The Lawrence University baseball team is starting to see all the hard work they put in practice pay off in games. The Vikings came back from spring break trip with their best-ever record for their annual trip. The Vikings returned north with a 5-7 record and have only one win less now than during the entire season last year. Coach Korey Krueger comments, “It’s just us deciding we are not going to lose anymore, and getting that attitude changed.” The Vikings are returning to their entire pitching rotation from a season ago, a rotation that Krueger calls “pretty solid.” Senior right-hander Rick Herzog leads the rotation. Herzog is off to a slow start, but he is expected to be a key player for the Vikings. Other returning pitchers Krueger expects to contribute are junior Justin Anthony, junior Ryan Zutter, and sophomore R.J. Rosenthal.

The Vikings also look to their freshman pitchers to play a large role this season. Anthony Kouba has been the best pitcher on the Viking staff so far with a 1-1 record and an earned run average of 1.54. Left-hander Allen Servais has been coming out of the bullpen but has been very consistent for Lawrence.

On the offensive side, Krueger likes what he sees. Returning for his senior season is catcher Jason Shanda. He batted .379 for the Vikings last season, and so far this spring he is batting .400 with three doubles and two triples.

Senior center fielder Matt Smith is also expected to play a role in the Vikings offensive attack. Though off to a slow start with a batting average of .222 in Florida, Smith’s bat is expected to heat up as the season continues.

Two other players playing major roles are junior shortstop Jeremy Tollefson, who is batting .359 with seven RBI’s this spring, and junior first baseman and pitcher Chris McGinley. McGinley did not play last year for the Vikings after hitting .264 with four homeruns his freshman season. He is expected to give the Vikings some extra power from the first base spot.

Coach Krueger feels the team’s offensive strengths are their depth and their speed. While they have not stolen many bases so far this spring, they intend to during the conference season.

The coaches in the Midwest Conference have ranked the Vikings third out of five teams in the North Division. Krueger likes where his team is now, saying, “Ripon is the top dog, but I don’t think there is a coach in the league that doesn’t think we will compete for second.” The first two teams in each division make it to the Midwest Conference Tournament, which is the Vikings’ goal.

“We want to make it to the MWC Tournament and knock off Ripon in the championship game. These guys we have here really want to win.” The Vikings will host Carroll College for a doubleheader Saturday afternoon if the weather permits.