Architecture through the ages: Lawrentians react to buildings with praise, amusement

The chapel, shown during its 1998 renovation, drew “a great deal of adverse criticism” for its domed tower. The interior is full of biblical and classical scenes depicted in stained glass.
Peter Gillette 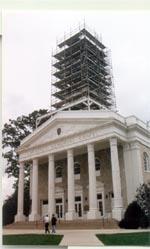 The chapel, shown during its 1998 renovation, drew “a great deal of adverse criticism” for its domed tower. The interior is full of biblical and classical scenes depicted in stained glass. ( )

According to Lawrence legend, architect Frank Lloyd Wright stood in the Memorial Chapel after giving his convocation in 1944, and called the building the ugliest building he had ever seen. Then, Wright stepped out onto the chapel steps, and looked across to Main Hall. “I stand corrected,” he said. The official Sesquicentennial LU record, Time and Traditions, dresses up the apocryphal tale, noting only that Wright “visits campus, expressing firm opinions during a convocation, a luncheon, an architecture class, and an informal discussion with students.” Time and Traditions did, however, concede that while he called the then-three year old fraternity quadrangle “‘appropriate to Lawrence,'” Wright objected to their “formal colonial design and their surface ornamentation.”

Whatever Wright actually said, Lawrence’s architecture has provided equal parts controversy and amusement throughout the school’s storied history. In honor of the residence hall that is currently under construction, The Lawrentian has decided to reach into its archives, and share how the students and faculty initially reacted to some of the buildings that have come to define Lawrence University.

As there was no campus newspaper while Main Hall was built, we shall begin our look into the past with an excerpt from the Thursday, October 18, 1917 issue of The Lawrentian; Vol. XXXIV, No. 2:

The Russell Sage dormitory was opened at the beginning of the school year, Thursday, October 4, although not entirely completed.The building is of buff limestone from the quarry at Eden, Wis., and is colonial in its architecture. It is 150 feet long and eighty feet wide.

Including the basement, the building is five stories in height. The building will accommodate 150 students. There are fifty single rooms in the building and fifty double rooms.

An infirmary and also elaborate parlors are included There is a passenger elevator. The building, when completed, will contain all the modern conveniences.

The Memorial Chapel is the most dominant edifice on campus, and is visible from quite a ways into town. However, even during its construction LU President Dr. Samuel Plantz found it necessary to defend the chapel design. Thursday, October 17, 1918; Vol. XXV, No. 2.:

Concerning the dome, of which a great deal of adverse criticism was made previous to its completion, Dr. Plantz is of the opinion that it adds to the beauty of the building. “In my opinion,” said Dr. Plantz, “the tower is to be one of the distinct features of the new auditorium, lending to the stately appearance of the Colonial architecture.”

The interior of the chapel, of which is practically finished, has a seating capacity of 1, 569 outside of the stage, and is finished in stained birch. The stained glass windows represent characters from art and history. On the west is the familiar Sir Galahad, followed by “Esther,” “Athena at the Tomb of Achilles,” and “The Good Samaritan.” On the east, “The Holy Family,” “King David,” “The Light of the World,” and “Charity” are placed in the order given.

New to the campus this fall is the just-completed Ruth de Young Kohler Hall for women. The high-rise dormitory structure is part of a two-million dollar campus building program in the 700 block of East College Avenue. The complex will include the Jason Downer Food Service Center, currently under construction.

The dormitory which will house 125 women [sic] was constructed at a cost of about $828,000. Kohler Hall with its carpeted corridors, kitchenettes on each floor, and individually decorated rooms represents a departure from previous Lawrence concepts of student housing.

The following caption appeared with a photo of the library, under construction. The Lawrentian’s description of the work-in-progress was only the first in a decades-long debate as to what the impersonal edifice most resembles. The unnamed writer even makes reference to the Lloyd Wright legend. Friday, April 25, 1975; Vol XCIV, No. 22.:

“The library is the cornerstone of a college or university, and this attractive building will be useful to students, faculty, and others for decades,” said President [Thomas] Smith.

The structure will be faced with limestone to harmonize with other campus buildings.

No building on campus is more colorful, that’s for sure. Following are three opinions expressed in a photo poll. The Lawrentian, Friday, January 20, 1989; Vol. CVI, No. 11.

“It is probably the ugliest thing that man could create-however, it will probably be beneficial for the Lawrence community.”-Cornelius Rush

“I have a feeling when working here that I am very close to nature.”-Won Hong.

“I don’t think it’s as bad as everyone says it is.”-Bill Reed.

This addition to the Con attempted to smoothly transition between the Music/Drama Center and the Chapel. October 16, 1991; Vol CIX, No. 1.

Heavy machinery, fenced-in paths and mud once endured by Lawrentians traveling between the Music-Drama Center and the Lawrence University Chapel have given way to a sparkling, light-filled new addition to the Conservatory.

“We’ve gone to great trouble to provide full handicapaccess,” [sic] said Dean Robert K. Dodson, referring to the ramps on the north and south sides of the building. In hopes of avoiding potentially “gruesome” accidents, he cautions people from riding bicycles on them.

Perched atop a river bluff, Briggs houses social sciences and math classes. As New Science Hall came up just last school year, this will be the last building discussed. Briggs’ light walls still smell of fresh paint and carpeting, but what’s important is the exterior, and how it brings the campus and the river closer. September 19, 1997; Vol. CXV, No. 1:

“I call it the ‘Stealth Building,'” laughed Professor of Psychology Peter Glick, “because it went up without people knowing [about it.]”.

A new greenhouse is being built next to Briggs Hall, and plans are being drawn for a boardwalk to go along the
river. President Rik Warch commented that with the new open area, what was “formerly our backyard” is now an active part of the campus.

The Wriston art Center polarized Lawrentians. While one student said it brought her “closer to nature.” Another called it “probably the ugliest thing that man could create.” Frank Lloyd Wright could not be reached for comment. ( )