The menÂ´s tennis team likes where they are right now after a very successful weekend, where they defeated two MWC foes.
Andy York 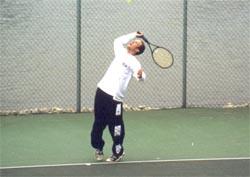 The menÂ´s tennis team likes where they are right now after a very successful weekend, where they defeated two MWC foes.

The Lawrence University men’s tennis team likes where they are right now after a very successful weekend. The Vikings defeated two Midwest Conference foes. They defeated Lake Forest 6-0 on Saturday and St. Norbert 7-0 on Sunday. The Vikings are currently 4-7 overall on the season and are 1-1 in the Midwest Conference North Division. What that record doesn’t show is that they are 2-0 against teams from the South Division of the MWC. Coach Dennis Niemi feels that his team can do some damage this season. “Unless we have a big breakdown, we should be one of the top four teams in the conference tournament.”

The Viking’s record may not look the best on a first glance, but if you look at their schedule a little deeper, you will see that the team has been very competitive. They did not win a single match on their spring break trip, but there is a reason behind that. “We played many tough teams on our trip, many division two schools and NAIA schools, so the competition was stiff,” Niemi said. “We were also missing our number two and four singles players. I told all our guys that everyone would play when we were on our trip, so we were outmatched most of the time.”

When Niemi has his best players in matches, the Vikings are very competitive. Number one singles player sophomore Jai Arora is undefeated so far in MWC play. So is number two senior Tom Lipari. Arora and Lipari also team up to produce Lawrence’s number one doubles team.

“Our number three and four singles players are both freshman, and they are giving our team a big boost this spring,” says Niemi. The two freshmen Niemi credits are number three Brian Hilgeman and number four Nick Beyler. They are also doubles partners and form LU’s second doubles team.

The fifth and sixth singles players do rotate, but for most of the season they have been sophomore Dan Putterman and junior Dave Carter. These two are also doubles partners.

All together, these players form a team that is a formidable foe in the Midwest Conference. “The majority of our team should make it to the Midwest Conference Tournament. We have a strong shot to win it as a team, as do all our individuals. Our only conference loss was to Ripon, and we only lost by one match. If we play hard we can beat any team in our conference. This is the strongest team I have had since I have been coaching here.”

The Vikings have three matches this week, at home against Beloit on Thursday, at Marian on Friday and at Milwaukee School of Engineering on Saturday.