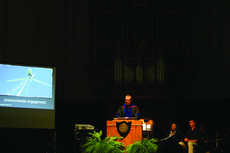 The Matriculation Convocation for Lawrence’s 2010-2011 school year and 162nd academic year was held Thursday, Sept. 16 in the newly renovated Lawrence Memorial Chapel.
The Matriculation Address, delivered annually by President Jill Beck, set off this year’s theme of “Innovation through Collaboration.” As a testament to the ideals of this theme, the address was titled “Expanding Student Opportunities in Research, Performance, Public Service and Environmental Activism” and was shared by both students and members of the faculty.
The convocation began with the procession of the faculty accompanied by University Organist Kathrine Handford and an opening poem read by Professor of Music Howard Niblock.
The annual Welcome Week Choir comprised of freshmen vocalists also performed two pieces, directed by Associate Professor of Music Phillip Swan and Assistant Professor of Music Stephen Sieck. Associate Professor of Music Gene Biringer gave Beck’s formal introduction.
Beck opened her address by explaining the many ways in which innovation is already an active pursuit within the Lawrence community and outlining the steps that must be taken in order to innovate at an institution like Lawrence.
Beck quoted professors from a number of disciplines in order to illustrate ways in which innovation is a wholly collaborative and inherently interdisciplinary process. “Thinking inside the box,” said Beck, “is as important as thinking outside the box.”
After her introduction, Beck opened the floor to students and faculty members who have used their interests to collaborate with others on innovative projects.
Joseph Neumann ’12 explained the work he did over the summer as a part of the recently established LU-R1 program, a prototype program that placed eleven students in advanced research labs with Lawrence alumni this past summer.
Assistant Professor of Government and Stephen Edward Scarff Professor of International Affairs Jason Brozek described a number of different student projects initiated over the past few years to enhance environmental engagement throughout the community.
Three representatives – two faculty members and one student – from different academic disciplines were chosen to speak about the general field of public service.
Associate Professor of Government and Edwin & Ruth West Professor of Economics and Social Science Claudena Skran noted that, within an academic institution, it is often difficult to reconcile the three major elements important for innovation: “teaching and learning, scholarship and creative work, and service.”
Skran expressed the value in discovering whether these areas might be integrated, providing as an example her scholarly-based projects in Sierra Leone, in which she and her students take scholarship to the next level, with a clear service-based intent.
Sarah Ehlinger ’11, a geology major, will travel to Sierra Leone with Skran this December, with this same balance of service and scholarship in mind. Ehlinger, who plans to examine lead contamination in Sierra Leone schoolyards, believes that her scholarly research can ultimately contribute to serving the children who may be affected by such contamination.
Professor of Music Janet Anthony, who has established a music education program in Haiti, provided further examples of collaboration between disciplines – in this case music and public service. Following the earthquake in Haiti, Anthony noted that music offers “some semblance of normalcy in the chaos that has become normal for so many.”
Anthony presented a short clip from the documentary “Kimbala: Hold On,” filmed by Carolyn Armstrong ’10 and Stephen Anunson ’10, which endeavors to present the idea, according to Anthony, that “through art, one can break down the barriers of education and class.”
Katelin Richter ’12 expressed how musical performance could be integrated into the discipline of economics, providing her studentled Lawrence Baroque Ensemble as an example of how entrepreneurship can expand into the field of the arts.
To conclude the address, Associate Professor of History Monica Rico focused on the idea of engaged learning, an important aspect to take into consideration in an institution of higher learning.
Rico emphasized that the “best we have to offer” is “our learning, our skills and our talents,” expressing her concern that the notion of a “Lawrence Bubble” often leads both students and faculty to believe that nothing major can be achieved here.
Rico, however, challenged this opinion, reminding the assembly, “Like every bubble, it disappears with a single touch.