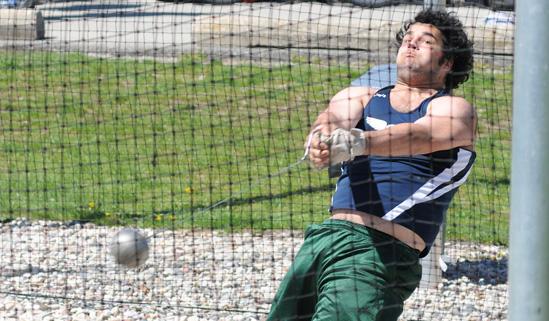 Just in case anyone forgot, the sport is called “track and field” for a reason. On April 21, the Lawrence University men’s throwing team gave us a solid reminder that it’s not just the work that’s done on the track that makes up the sport. Leading the team and scoring 26 of the 47 total points at last weekend’s St. Norbert Invitational, the throwing team made a huge impact on what the entire team’s goals will be as they start preparing for the conference meet later this year.

In the shot put, freshmen Spencer Swick and Nick Craker took third and fourth respectively with their throws of 43’10” and 42’6″. “Those two freshman are really starting to find their niche and it will be exciting to see what they do the rest of the season and the rest of their careers,” noted Head Coach Jason Fast. Swick’s throw put him at seventh overall in the conference. Seniors Nick Kerkman and Stan Jablonski also placed, snatching sixth and eighth place with throws of 40’7″ and 39’11” respectively. In the discus, Craker led the way placing fourth with his throw of 132’5″ which, in addition to being a personal best by over 13 feet, also places him in seventh overall in the conference. In the hammer throw, Kerkman grabbed fourth place with his toss of 144’9″. “The Throwing events were the story of the meet for the men,” remarked Fast. “We showed great improvement.”

Freshman standout Kyle Dockery also added 10 points to the board with his first place finish in the 5,000m run. Finishing in a blazing 15:35, Dockery ran almost a full minute faster this week than he did two weeks ago. “He ran a great race and I expect more of the same for this weekend,” stated Fast, “He has shown the ability to perform well when under the pressure of a big race.”

Dockery, who also had a birthday on the day of the meet, had many things to celebrate. “I got a lot of extra support during the race and afterwards which was nice,” he said. “I also got some help from [senior] Sam [Stevens], who paced me for the first two miles of my 5k, which really helped me stay on pace and set the tone for the rest of the race.”

Stevens had competed the night before at the Phil Esten Invite at UW-La Crosse. He won the steeplechase, and his time currently ranks him 38th in the country. Both Dockery and Stevens have set some pretty high goals for themselves. Dockery will be attempting to qualify for USATF Junior Nationals in the 10,000m run, and Stevens will be attempting to qualify in the 3,000m steeplechase. “Although I might not end up running at the race in May,” noted Dockery, “to know that I’m able to run times like that will be a major confidence booster for cross country and track next year.”

On the women’s side, junior Rose Tepper and freshman Anna Bolgrien led the way. Bolgrien’s time of 1:07.66 in the 400m hurdles currently leads the conference and was good enough for second place. Tepper came within an inch of her season’s best jump and also finished second, jumping 5’1.75″. Sophomore Sam Luebke also had a big PR in the 100m dash breaking 14 for the first time in her career running 13.81.

This weekend the team will travel to Illinois for the Benedictine Twilight Invitational on April 27.