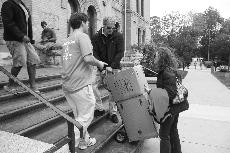 Class of 2014: Larger than ever
The majority of Lawrence’s class of 2014 settled into their dorms last Tuesday, Sept. 7. Like any other year, Welcome Week leaders and RLAs greeted students and parents, helping them carry heavy suitcases and boxes up and down stairs. While move-in day operated similarly to past years, there was one huge difference: The class of 2014 has over 100 students more than last year’s class.
Initially, the large size of the incoming class came as a surprise to Lawrence’s faculty and staff. “We offered admission to exactly the same number of students this year as last year, but a larger proportion of those students accepted our offers of admission” explained Director of Admissions Ken Anselment.
After news of the class’s size spread throughout campus, surprise turned into anticipation of the students’ arrival. When asked about his reaction to the large group of students moving onto campus, Anselment said, “We were excited – it’s invigorating when that many people are so excited about being at Lawrence.”
As in years past, the class of 2014 is comprised of students from many different backgrounds. “This class may have our most geographically and culturally diverse blend of students we’ve seen in a while: They come from 36 states and more than 30 countries, and they are the most diverse group we have seen in recent history,” described Anselment.
The increase in student body size will both subtly and not so subtly affect life at Lawrence, and extensive planning was required in order to accommodate the larger number of students.Freshman Studies
Perhaps most notably, the influx in first year students means slight adjustments to Lawrence’s Freshman Studies program. Every incoming student at Lawrence is required to take Freshman Studies, offered only during the 11:10 a.m. timeslot Mondays, Wednesdays and Fridays. Last year, there were 26 sections of Freshman Studies offered first and second term, but this year’s incoming class requires 32 for both first and second term.
Between obtaining a sufficient number of instructors to teach the extra sections of Freshman Studies and finding adequate classroom space, Lawrence faculty and staff worked hard to ensure that they were ready to welcome the class of 2014.
“We’re ready,” assured Professor of Psychology and Director of Freshman Studies Terry Gottfried, speaking for all Freshman Studies instructors.
The faculty and staff’s readiness did not come without a lot of preparation. Gottfried explained that the new classroom facilities in Memorial Hall will cover the overflowing 11:10 a.m. slot classes.
With additional sections comes the need for additional instructors. “It was surprisingly not too difficult to get instructors once they knew about the size of the incoming class,” said Gottfried as he explained that some professors chose to “overload” by teaching three courses per term in order to cover the extra sections required.
Freshman Studies is also being taught by some professors whose classes were cancelled due to low enrollment and by some instructors new to Lawrence’s teaching staff.
Six additional sections of Freshman Studies guarantees that class sizes will remain small, averaging about 14 to 15 students per class. “[Keeping class sizes small] was a priority for me and the provost,” Gottfried explained.
The incoming class does require, however, one major change to the normal Freshman Studies routine: “We’ll have all the lectures in the Chapel, since Stansbury cannot hold all the students and faculty . this year,” said Gottfried.
Over the summer, the Lawrence Memorial Chapel was renovated and received new seats. “With the renovation in the Chapel,” Gottfried mused, “It should actually be a better place than last year – no more noisy seats!”
Freshman Studies is not the only class being affected by the large incoming class. Professor of Biology Elizabeth De Stasio noted that the biology department has hired new faculty members in order to meet the needs of students interested in taking introductory level classes.
“We expect enrollments to be much larger in introductory courses this year based on the interests and potential majors that incoming students indicated on their admission and advising forms,” she explained. The additional Biology 110 course offerings begin during second term.
“We have two faculty members on leave during term one and one faculty member on part-time leave,” said De Stasio. “We didn’t feel we could properly support Biology 110 projects in term one. In term two, we will have plenty of faculty to support the larger number of student projects.”

Moving In
In spite of all the anticipation for the class of 2014’s arrival, Tuesday’s move-in was largely successful. “Move-in went wonderfully!” declared Kohler Hall’s Residence Hall Director Chris Conrad, whose staff welcomed 65 freshmen into the building.
“New students bring lots of excitement and new ideas to the hall,” he said. “I enjoy meeting new students because their energy is contagious.”
Colman Hall’s Head RLA Sara Brannon was also pleasantly surprised with move-in on Tuesday. “Considering the fact that we have 100 more freshmen than we’ve ever had, I think [move-in] went surprisingly well,” she said.
The students’ smooth transition into the residence hall may have had to do with the way in which they arrived. “Rather than having a huge rush of students in the morning like in years past,” Brannon explained, “we had a pretty steady flow of arrivals throughout the day, which allowed the Welcome Week Leaders and RLAs to be available to help new students with just about everything.”
Not all of the transitions have been easy, however. One of the most noticeable changes to residence life has been the conversion of lounges to dorm rooms in Kohler and Colman Halls.
Kohler Hall’s Head RLA Naveed Islam reflected on the challenges of creating community in a dorm in which six lounges have been converted to dorm rooms: “We still haven’t figured out the logistics of programming for floors alone,” he said. “So far, we’ve only been able to program for the hall as a whole.”
While the dorms may be more crowded, Lawrentians remain optimistic and excited about the new school year and the new students on campus. “Freshmen are so enthusiastic about everything, and their excitement seems to rub off on the upper classmen and rejuvenates us after a summer away from school,” said Brannon. “I think the class of 2014 will bring great things to LU.”
Anselment, like all of Lawrence, welcomes the incoming students to campus. “Thank you for choosing Lawrence,” Anselment said. “We’re thrilled to have you with us.” He added, “Don’t forget to eat your vegetables. 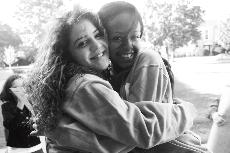 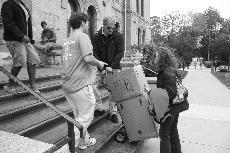 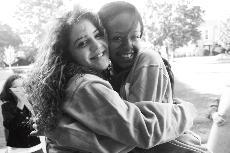