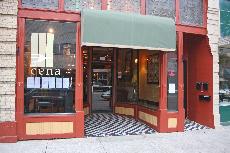 TR: If you’ve walked down College Ave looking for Sirocco’s recently, I regret to inform you that it’s gone. However, if you’re interested in fine dining options close to campus, pop into this quaint little bistro that’s just two blocks away and in the exact same spot Sirocco’s used to be.
NI: Cena opened its doors to famished Appletonians Oct. 20 last year. They’re actually cooking up – see what I did there? – something special for their first of hopefully many anniversaries that’s happening in two weeks, though they couldn’t give us any specifics.
TR: I don’t remember the last time I went to Sirocco’s but I’d venture a guess and say Cena doesn’t look all that different. The décor has a very urban feel to it, with brick walls and a network of pipes haphazardly moving along the ceiling. We sat near the back where the lights were dim, which complimented the earthy colors of the decorative pieces that hung from the painted walls. In short, they’ve done the most with the space they had.
NI: Cena’s layout is one-third restaurant, one-third bar and one-third lounge. The restaurant takes up two-thirds of the space but the bar and lounge areas have enough room to host live performances. We went to dinner early in the evening on a weekday but they were already quite busy.
TR: The tables were in rather close proximity to each other. You don’t get much privacy when that invisible wall of empty space is so thin.
NI: They started us off with bread, served with a sauce made with olive oil and aged balsamic vinegar. We whet our appetites as we looked through the menu for some good seafood. The food got here very fast.
TR: I worked my way up to the seared steelhead salmon with tasty spoonfuls of my chili lime rice. I mostly ignored the shitake mushroom salad that came with it until the very end, when I realized that it was just sitting there. It’s not that it was bad; it just wasn’t the best salad I’ve had. The salmon however, was exquisite. There were points during the meal when I thought that what I was eating wasn’t very different from what we get at Andrew Common’s for meal swipes we’ve already paid for, but the salmon changed my opinion entirely. It was quite tender and very juicy.
NI: My seared sea scallops came with a rich and creamy risotto that I loved. There was a lonely clump of spinach that sat next to everything else on my plate. It made my insides feel healthy after I ate it. The scallops themselves were very good. I had wanted to order the mako shark after seeing it on the sandwich board outside last week but was disappointed to find that they didn’t have it this week. The scallops and risotto definitely eased the blow.
TR: Everything looked really good and was arranged very neatly but, being a skeptic for appearances I was surprised it all tasted as good as it looked.
NI: We ordered a minipecan pie for dessert. It was a delicious tart filled with peaches and sautéed with honey. The crust was made with brown sugar and was just the right amount of crunchy.
TR: Cena gets its produce locally and doesn’t pre-prepare anything on the menu. The pie was fresh out of the oven and prepared after we had placed the order. Cena does this in order to cater to the various dietary needs of its patrons and adjust their menu on the fly.
NI: When we asked for the check, the singles and fives in my wallet were throwing a going away party for the tens and twenties. But, everything was reasonably priced and wasn’t nearly as steep as we expected.
TR: Overall I would give Cena two thumbs up.
NI: Agreed. Feel free to stop by Cena, dear reader, the next time you and your friends go out for a night on the town. 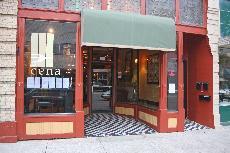