Looking back on Lawrence International as it moves forward 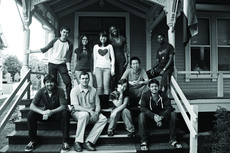 It was late in the afternoon by the time I woke up to explore the campus on my first day at Lawrence three years ago. I remember spotting a small group of students gathered in front of Downer Commons as I pushed the front door of Kohler Hall open on a chilly day in early September.
A girl stepped forward and said hello. She asked me my name and where I was from before introducing me to the rest of the group. I remember a student from Palestine, one from Russia, two from Japan and two more from Malaysia.
We spent the afternoon walking around College Ave and chatting among ourselves about the homes we left behind, the classes we were going to take and what we thought our lives here would be like.
Hang-Giang Bui ’08, the girl who had asked me to join them for the trip downtown, invited me to a pizza party later that night at the International House. I remember her saying that if I needed anything at all that I could always stop by. This was how I first met the members of Lawrence International.
Founded by physics and mathematics major Yiannakis Manoli in 1976, Lawrence International began life as a student organization with 15 members. They wished to provide opportunities for social interaction among international students, inform the Lawrence community of world issues and act as a resource for incoming freshmen by helping them get settled in the United States.
Their membership steadily increased to 35 and later to 47 within the first two years of the group’s existence in part due to the success of events such as talks from outside speakers, trips to nearby parks and cities and the first International Dinner.
34 years later Lawrence has 153 visa-holding international students including freshmen and exchange students. 64 of these students are part of the Class of 2014, including 19 one-year-exchange students from Belarus, the Netherlands, Canada and Japan via Lawrence’s exchange program with Waseda University.
Seniors Siddhant Dayal and Slavena Molle lead the Executive Board as LI President and Vice President, with George Levy, Nhi Nguyen, Ornella Hills, Luyuan Li, Aimen Khan, Mei Gong and Waseda student Katsuhiro Kimura filling up the ranks. International Student Services Coordinator Tim Schmidt works closely with the group as an advisor.
“I joined because it is a way for me to contribute to, rather than just enjoy the benefits of the international community on campus,” said Molle. “It is gratifying to know that through your own efforts you – hopefully – manage to improve the Lawrence experience for the other international kids and help them get adjusted to the life here much more quickly.”
Molle, who hails from Bulgaria, recalls her own experience as a freshman and notes how stressful it can be. “It was a bit surreal, I guess,” she says, “I kept waiting for my family to show up and tell me that they’ve changed their mind about me studying abroad. I didn’t know anyone and no one [had moved in] on my floor in Colman, where I lived my freshman year.”
Dayal, who has served on the Exec Board and has stayed involved with LI throughout his time at Lawrence, remembers arriving on campus and being offered a helping hand from LI members.
“I felt like all other international students back then, a little bit in awe of the fact that I was actually here,” Dayal says, “I wanted to call my parents [in India] but I didn’t have a phone at the time. I was asking a fellow freshman if I could borrow his phone and a senior overheard our conversation. He graciously and warmly offered his phone to me so that I could call home. That little gesture is what defines Lawrence International for me.”
This will be an important year for Lawrence International and the Executive Board, who will plan for a much larger group of students than in previous years. In order to ease these new international students through the difficult transition of studying in an American college campus, International Student Admissions, International Student Services and LI have worked together to institute the Mentor Program.
“There have been many stories about the difficulty of the first term on campus,” says Associate Director of Admissions Nicole Buenzli. “We wanted to do something to help.” In addition to the program, the Exec Board will also be planning the LI formals, High Cliff Picnic, Ethnic Dinners and Cabaret.
In the months to come, Lawrence International will begin making the transition to a new Exec Board and begin sowing the seeds for the future of the organization. With this year’s huge freshman class there should be no shortage of applicants to fill the positions on the Exec Board.
“I hope that [LI] continues to be a very active student organization that promotes global and cultural awareness on campus,” says Tim Schmidt, “I expect it to remain a very inclusive student organization – one that is an advocate and resource for both international and domestic students at Lawrence.