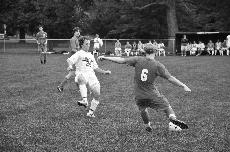 The Lawrence men’s soccer team hosted the Lake Forest College Foresters last Saturday in the fourth of six consecutive home games for the Vikings.
The Foresters (2-3, 1-2 MWC) hung with the Vikings for the majority of the first half, fending off all of Lawrence’s offensive opportunities. However, in the 27th minute, the Vikings exposed a weak defensive set and scored the first – and only – goal of the match.
Freshman Cameron Pieper sent a bending cross into the box from a wide right position on the pitch to senior Bennett Pang, who finished his run with a perfectly placed diving header. It was Pang’s third goal of the still-young season.
Although the Vikings’ senior goalkeeper Andrew Finley protected the net and earned a shutout, the Foresters did not go without chances in the second half. The last twenty minutes of the match consisted of an onslaught of Forester attacks.
Lawrence defensive backs Colin Vize and Hashim Allah-Morad kept their composure throughout the second half, but it was senior defender Billy Bunzel that saved the game with an excellent tackle in the box on a Forester attack with less than 10 minutes to go in the match.
Thanks to the Vikings’ defense, Finley only needed to make three saves to earn his first shutout of the season.
Lawrence (5-2, 2-0 MWC) remains undefeated at home and sits atop the conference standings, sharing the top position with Ripon College. The Vikings have two home games remaining before they return to the road. They will next take the field at 3:00 p.m. Saturday against North Central at 3:30 p.m. before finishing their homestand against UW-Oshkosh at 4 p.m. Tuesday. 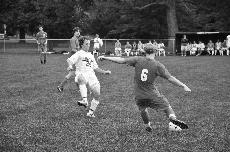