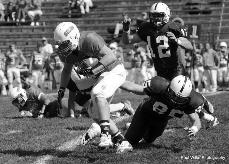 The Viking football team took on perennial national powerhouse Monmouth College in a closely contested home match last weekend.
The game began as a defensive struggle, with neither team scoring in the first quarter. Sophomore quarterback Tyler Mazur began the game with three incompletions and an interception, but it was Mazur who finally broke through the Monmouth defense halfway through the second quarter by taking to the ground for an 80-yard scoring run.
Though Monmouth soon answered to tie the score 6-6, the Vikings fired in two quick scores in the final three minutes. Mazur orchestrated another big play to connect with freshman running back Sam Wagner on a 50-yard touchdown toss. Senior safety Jeff Nichols then snagged an interception to set Lawrence up inside Monmouth territory with plenty of time left to score.
The Vikings didn’t disappoint, as senior wide receiver Jeremiah Johnson snagged a Mazur pass and punched the ball in to send his team into halftime with a 19-6 lead.
In the third quarter, however, things started to fall apart for head coach Chris Howard’s squad. Monmouth took the ball in for a score on the opening drive of the half, then intercepted a Mazur pass on each of three consecutive drives. Scoring 24 straight points in the third quarter, the Fighting Scots grabbed a 30-19 lead.
In the fourth quarter, backup quarterback Luke Barthelmess stepped in and the Vikings on a six-play, 58-yard drive for a touchdown. Barthelmess, a freshman, capped off the drive with a 19-yard toss to junior slot receiver Nick Thackston.
Lawrence, now behind 30-25, would get the ball back once more in the game, but the Vikings were backed up at their own 10-yard line and had their attempt at a game-winning drive squashed when Monmouth sophomore Nathan Van Metre sacked Barthelmess on the Vikings’ 14-yard line.
Despite the tough loss, the Vikings played well in the game, and they will carry the momentum from that game into this weekend, when they will travel to DePere, Wis. to take on the Green Knights of St. Norbert College.