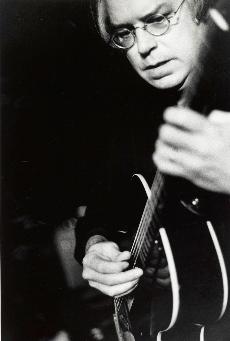 Going to New York City to see jazz is a hassle for most New Jerseyans. We have to waste $30 on round-trip train tickets and spend the ride with the obnoxious North New Jerseyans who board the train at stops like Jersey Avenue, Rahway and Secaucus.
So after seeing several New York concerts this summer, I promised myself that I would not spend any more money on overpriced train tickets or jazz clubs.
That promise lasted until I scanned the jazz listings page of the New York Times and saw that the guitarist Bill Frisell and the drummer Joey Baron were playing a duo concert at The Stone.
As I walked toward The Stone an hour and a half before the show started, I was surprised to see about 20 people already in line. I joined the line, sat on the sidewalk and took in The Stone’s unremarkable exterior and surroundings.
Its brick walls are filled with graffiti and it borders a gas station, a deli and a Puerto Rican barbershop. The only feature that even hints at something non-industrial – not to mention artistic – is a glass door with a sign that says “the stone” in small lowercase white letters.
The club opened its doors about 15 minutes before the show started, at which point there must have been at least 100 people in line. The line moved slowly, and once I passed through the door, I rushed to an open seat I saw directly behind Joey Baron’s drum set.
Soon after, as many people as could fit in the small, black room filled the chairs, took seats on the floor, sat in the aisle and squeezed in wherever they could fit.
After the entire audience came to the realization that the lack of fans and air conditioning made the room unbearably hot, two middle-aged, unassuming musicians appeared from the depths of The Stone’s basement. Baron and Frisell quickly introduced themselves, commented on how everyone was already sweating and began the music.
While the music was mostly improvised, the duo did use themes as jumping off points for their improvisations. The first piece they played had an upbeat swing melody, which featured Baron’s articulate and precise brushwork and Frisell’s tasteful use of sustained guitar chords and effects.
Both musicians took solos and interacted with each other through more traditional swing comping patterns for about 10 minutes.
The second piece was much slower and showcased Baron’s use of extended percussion techniques, such as placing a spare hi-hat cymbal on a floor tom and using different beaters to get various tones from his drums.
However, the highlight of the show was the duo’s 30-minute improvisation on the third piece. They began with a loud funk groove and slowly morphed into a spacier ballad-like section. They eventually built up to the piece’s initial energy level, with Baron soloing over Frisell’s swing ostinato.
Frisell’s guitar became increasingly distorted and Baron’s solo quickly became loud and fast, reminiscent of a jazz-flavored heavy metal tune. While the end of the piece featured Baron’s technique, what really impressed me were the duo’s listening skills, their effective use of volume, power and space, and their ability to structure a 30-minute improvisation.
After the piece ended, Baron thanked the crowd for supporting The Stone, and joked that although the venue felt like a furnace, it was not nearly as expensive or pretentious as some more commercial New York jazz clubs.
The sweat-covered audience seemed to agree. And as we exited The Stone, there were 100 more people waiting in line for the next set.
An aside: if you are interested in supporting the Lawrence University jazz scene, come to Monday night jam sessions at the café from 9:30 p.m. to midnight. You are welcome to watch and play. 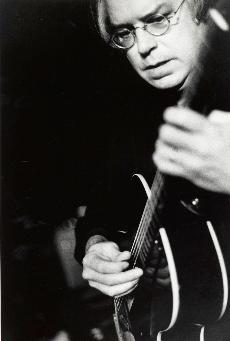