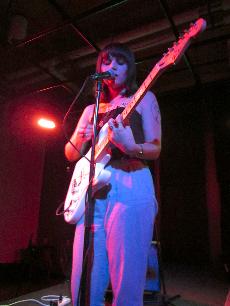 Band Booking Committee held their first concert of the new school year Wednesday, Sept. 16. Last year, the student-led group brought in impressive acts such as Bishop Allen, Pomegranates and Voxtrot.
This year, they got off to another great start by booking two up-and-coming bands, Male Bonding and Best Coast. The debut albums by both bands, “Nothing Hurts” and “Crazy For You,” respectively, are sure to end up on multiple year-end lists, including my own.
Male Bonding, a high-energy punk rock trio from London, started off the show with a bang at 9:30 p.m. While the band played only a 30-minute set, there was plenty to like. The band’s debut album clocks in at 29 minutes, and with only a handful of singles to accompany these songs, they don’t have a ton of material.
But they more than make up for it in energy. From the moment they began playing, the Esch Studio – near to capacity – was shaking from the crowd jumping. It was nearly impossible to find a single person who was not nodding his or her head.
That’s because the band’s songs are catchy. It seems as if, unlike other punk bands, the trio knows how to write a complete song that doesn’t rely simply on bar and power chords.
The fact that they’re able to pack so much into such short songs is extremely impressive and shows that Male Bonding is a band to be reckoned with for years to come.
The highlight of the set was the song “Franklin,” which at 2:45 is easily the longest song on “Nothing Hurts.” It is nearly impossible not to dance along. And as they sang the chorus, “all this won’t last forever,” I felt myself lamenting the fact that their set wouldn’t last forever as well.
After a short break, Best Coast, Bethany Cosentino’s band from Los Angeles, took to the stage. They had a tough act to follow, and it came as no surprise that they couldn’t deliver. While their album “Crazy For You” is quite good, the songs didn’t seem to translate as well in live performance.
It may have just been an off night for this young, talented band. I previously saw them at the Pitchfork Music Festival last summer, where they put on quite an entertaining set.
However, Best Coast is sort of a one-trick pony: You either like them or you don’t. Their songs all sound very similar, and in a live setting, it can be challenging to tell the songs apart. While some of their songs, including “Crazy For You” and “This Is Real,” sounded great, many of the others fell flat.
Part of this flatness can be attributed to the sound problems that plagued their set. Some microphones began to cut out during Male Bonding’s set, but the band played right through it, as one would expect professional musicians to do.
Cosentino, however, was unable to do so. She was clearly upset, and more than once she turned to guitarist Bobb Bruno to show her disgust.
At one point, she even stopped playing in the middle of a song, declaring, “This is the worst mic I’ve ever seen.” Bruno replied, “You can either stop playing every song or just play through it.”
This was exactly how I felt, and it seemed as if the crowd agreed, whether or not they could hear this exchange. By the end of the set, the room was nearly empty.
While Best Coast may have been a letdown, Male Bonding shone and proved that BBC has a great eye for music. Hopefully they can continue to bring such great, promising bands to campus. I know Lawrentians will appreciate it. 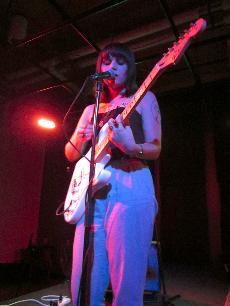