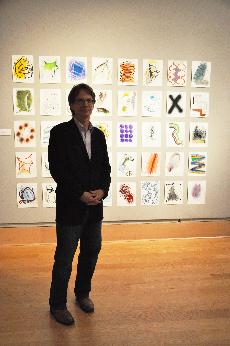 Richard Knight, a Milwaukee-based artist now teaching at the Milwaukee Institute of Art and Design, works with both two-dimensional and three-dimensional forms. In Knight’s work, however, the two are intricately connected.
During the artist lecture that opened up the 2010-11 exhibition series, Knight explained that he makes objects and sculptures from bits and pieces of material left over from his mixed-media works. He then takes those objects and paints them. This cycle is what provides him with inspiration for future pieces.
Knight also spoke about some prevailing issues in contemporary painting. Most important to him was the contrast between the fine art of painting and its lack of craft. His paintings show a process, not simply through brushstrokes and unfinished edges, but also through bonding agents like glue still appearing in the finished product.
The highly polished paintings or objects that try to remove all traces of a process are considered good by some, but such art works in ways that oppose Knight’s work.
Knight’s artist statement explains that his “works create a visual language that documents an intuitive and tactile process of making sense out of the world.” They are not “about the object” or the final product, but about the making of art itself.
During his lecture, Knight introduced a slide of one of his paintings by saying that it was “a painting [he] felt compelled to do.” This rather peculiar way of introducing a work of art speaks volumes about Knight’s previous job as the director of an art gallery. He spoke of that particular job as more an exercise in “commodity dealing” than he would have liked.
The idea that an artist feels compelled to paint or sculpt implicitly works against the underlying truth of the gallery business: that art needs to compel a viewer to buy. Knight’s paintings and sculptures on display in the Kohler Gallery of the Wriston Art Center exhibit a lack of care for the assigned value of objects.
Discarded materials become large sculptures that take up large amounts of space. Those sculptures are then re-imagined and inserted into large mixed-media paintings that provide the material for other sculptures. There is no defined audience, no parties interested in purchasing – only an uninterrupted cycle. 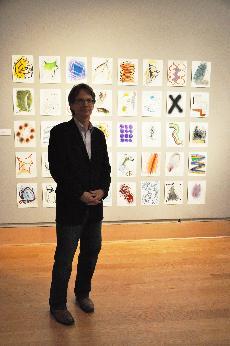