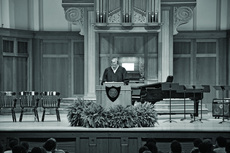 To celebrate the academic and extracurricular honors earned by students, professors and student organizations during the 2009-2010 year, the annual Honors Convocation was held Thursday, May 20 at 11:10 a.m. in the Lawrence Memorial Chapel.
Organist Susanna Valleau played a Bach and Mendelssohn prelude, and the procession commenced with the sound of David Johnson’s “Trumpet Tune in D Major,” played by Daniel O’Connor on the chapel organ. A soft high hat transitioned into the interlude, “Egberto,” by Florian Ross, which was performed by the LUJE saxophone and percussion sections.
After the music was finished, President Jill Beck took the stage and began the congratulatory portion of the convocation by acknowledging Associate Professor of English Karen Hoffmann, who won the Freshmen Studies Teaching Award.
Beck then proceeded to applaud those students who have demonstrated exceptional dedication to their subject area or who have become models of a balanced lifestyle at Lawrence University and beyond.
Next, to encourage Lawrentians interested in what life may hold outside the Lawrence bubble, Beck introduced Vermont State Senator Robert Hartwell ’69. Hartwell presented an example of the work ethic and mindset that are necessary to take on the climate change challenge with his speech, “America at the Crossroads: Accepting the Climate Change Challenge.”
Hartwell currently serves on the Senate Committee on Natural Resources and Energy as well as the Senate Committee on Institutions.
Hartwell has made great contributions to government policy and legislation that work to protect the environment. For example, Hartwell co-sponsored Act 198, legislation placing Vermont’s groundwater in the public trust and regulating water withdrawals by water bottling companies.
Hartwell began his speech by depicting the 1960s, a time of burgeoning awareness of the environment that was generated in large part by marine biologist and nature writer Rachel Carson. He pointed to the fragility of the environment – of the value in human care for the earth – that Carson stressed, and how her message is relevant today.
He then moved on to discuss the present ways the earth is hurting. He gave the bird plight in Vermont as an example. The bird plight is the result of industrial mowing that destroys nests of 882 different species of landbirds before the birds are mature enough to take flight, causing significant decreases in the landbird populations.
Next, Hartwell pointed to environmental changes that are slowly gaining more attention from the government today, such as melting glaciers in the arctic, which are causing rising sea levels.
“Politics couldn’t solve the problem, so the climate did,” stated Hartwell. The current problems and predicted destructive catastrophes of climate change are turning heads.
However, there is a difference between turning heads and taking steps in the direction of a solution. Hartwell continues to balance awareness and action as he works on geothermal energy projects and fundraising for the Town of Pownal Wastewater Project while simultaneously working on policy and legislation in the government.