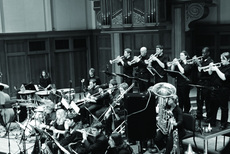 The Lawrence University jazz bands put together a crowd-pleasing show last Friday in the Lawrence Memorial Chapel.
The Lawrence University Jazz Band opened its set with “Fly By Romance,” a straight-ahead swing arrangement of a Rodgers and Hart tune. While the horns played energetically, the melodic lines lacked clarity at times and the band’s sound was muddled in the most complicated sections.
The highlight of the Jazz Band’s set was “Piré,” an Afro-Latin piece driven by the band’s three percussionists. On drumset, freshman Patrick Marschke kept the beat lively and exciting, but the extra color added by Sam Lewin’s congas and Kristin Olson’s cowbell was the key to the groove that accompanied strong solos by saxophonist Cary Foxx and trumpeter Rob Goodwin.
The guitar solo by Jake Fisher on the band’s last piece, “Wyrgly,” was excellent as well.
In a softer moment on the Dave Rivello-composed “Chorale,” a short solo by bassist Harrison Keeshin stood out in its vulnerability. Gently underscored by Carl Kennedy’s muted piano chords and lasting only a few moments, Keeshin’s solo was excellent and grabbed the audience’s attention, ending seemingly just after it began.
While the band played well, the audience was distracted by the introductions given by director Patty Darling, who frequently over-introduced pieces and even went so far as to describe “Fly By Romance” as “extremely difficult.”
In contrast to the overly talkative Darling was Fred Sturm, the director of the Lawrence University Jazz Ensemble. Keeping his introductions to a minimum and choosing instead to crack the occasional joke – his opening speech concluded with a declaration to the Jazz Band that “this means war!” – Sturm kept the atmosphere both relaxed and professional, allowing the music to speak for itself.
Like the Jazz Band, LUJE began with a straight-ahead swing tune, but LUJE’s playing retained the energy of the first band’s set and added remarkable clarity to the melodic lines. On that first piece, “Friday Night at the Cadillac Club,” and on the appropriately-named “Happy Song,” the band played with vigor and precision.
“Happy Song,” a selection from composer Bob Bruckmeyer’s “Spirit Music,” featured extended solos by seniors Paul Dietrich and Dan Watkins. Dietrich’s trumpet solo, which came first, was very strong, but Watkins one-upped his fellow senior with a highly enjoyable soprano saxophone solo over a bouncy ostinato from the rhythm section.
The rhythm section, composed of pianist Dario LaPoma, percussionist Andrew Green and bassist Brian Courage, displayed a great deal of sensitivity and seemed incredibly comfortable with each other onstage. It was remarkable to hear a rhythm section that displayed this degree of give-and-take, and the trio should be commended for their flexibility.
LUJE also premiered “Beautiful Medium,” a work by composition major Carl Kennedy. Kennedy used flugelhorn, muted trumpets and vocalise syllables, sung by senior vocal performance major Patty LeClair, to create a hypnotic groove that reflected well on Kennedy’s potential as a jazz composer.
Closing the concert was “Splatch,” a Sturm-arranged chart that served as a chance for five other seniors to perform solos. The extended solo section showcased a wide array of styles, ranging from the take-no-prisoners attack of trumpeter Drew Baumgartner to the trombone work of Erik Anderson, which was at times reminiscent of a Central Asian caravan.
Again, the rhythm section contributed heavily to the versatility of the piece’s solo section; LaPoma played piano and jazz organ simultaneously at one point.
LaPoma, pianist Joe Strachan, Green, percussionist Tristan Renfrow and Courage provided a strong rotation at the three primary instruments, while guitarist Mark Hirsch and percussionist Katrina Shore added color and made the rhythm section the ensemble’s strong point.
The audience was very pleased with LUJE’s excellent set. By the end of the night, the crowd was relaxed enough to laugh heavily at small things, like the expression on Sturm’s face when he described Watkins as being “from North Dakota.”
The relaxed atmosphere was the clearest result of a strong night for the Lawrence jazz bands – both ensembles had fun playing their sets, and the fun was contagious