“The [End] of Something”: Voxtrot stops by Lawrence on farewell tour 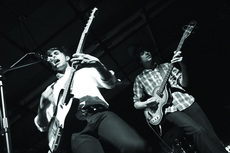 Editor’s note: I play drums in the band that opened for Voxtrot, but I couldn’t pass up the opportunity to write about one of my favorite bands, so Ana Kennedy worked with me on this piece.
Saying goodbye is never easy. If I ever doubted that, cliché, Austin, Texas-based indie-pop quintet Voxtrot reminded me of its truth at their concert in the Esch Studio last Saturday night, May 22.
Even with Le Brawl, Mlée’s spring dance show and Shack-A-Thon all going on too, students and community members alike packed the space to create a truly fantastic, albeit bittersweet, send-off for the much-loved quintet.
The group first made waves in 2005 with the EP “Raised By Wolves,” and followed that with two more in 2006, “Mothers, Daughters, Sisters, and Wives” and “Your Biggest Fan.”
These three excellent releases invited loving comparisons to The Smiths, The Housemartins and Belle & Sebastian, and their growing fan base, largely influenced by music blogs, eagerly awaited the arrival of their debut full-length LP.
That LP, the self-titled “Voxtrot” was a simmering, subtle and thoughtful disc, and the May 22 show at Lawrence marked three years since its release in 2007.
The concert itself was a fitting display of the band’s musical talent, articulate lyricism and charismatic stage presence, all of which have garnered critical acclaim and a fiercely loyal fan base.
Fronted by the charming and hilarious Ramesh Srivastava on guitar and piano, the quintet packed the set with old favorites from their numerous EP releases.
The clean, trebly guitars and the warm bass tones that populate their releases all came out beautifully during their hour-long set. The coda to “Raised By Wolves” sounded just as shimmering as it did on record, and the enthusiastic fans in the front – the two of us included – shouted along to every word.
In one of the last tunes before the encore, Srivastava introduced their boppy breakout single “The Start of Something” as “one of the oldest Voxtrot songs.”
However, in the capable hands of Srivastava, bassist Jason Chronis, guitarist Mitch Calvert, drummer Matt Simon and keyboard player Jared Van Fleet, “The Start of Something” sounded just refreshing and poignant as it did back in 2005.
The sweeping, melodic “Wrecking Force” that closes the “Raised By Wolves” EP and the more aggressive “Kid Gloves” from the full-length “Voxtrot” also stood out during the show.
Since the lukewarm critical reception of “Voxtrot,” the band released a few singles and a 7″ last summer, the wanderlust-inducing “Berlin, Without Return.” On April 21, 2010, a few days after Band Booking Committee confirmed their appearance on campus, Voxtrot announced that this string of shows, including appearances in New York, Washington, D.C., Austin, and Los Angeles, would be its last as part of the “Goodbye Cruel World” tour.
Srivastava wrote a heartfelt note on the band’s website, expressing appreciation as well as restlessness: “Being in Voxtrot has been wonderful and amazing, but it is only one chapter in the book.”
During their visit, the guys genuinely appreciated every compliment and autograph request. They visited the SLUG potluck, went to happy hour at the VR and ended the night by playing a game of basketball on Boldt Way.
They posed for photos after the show and generously complimented campus openers The Debutantes. Their energy transcended the stage, and their magnetic presence affected everyone they spoke to and every place they went.
Many fans expressed a sense of disappointment at this breakup; Voxtrot was the rare type of band that affected listeners in an emotional, immediate and lasting way. The band will be sincerely missed, but there will undoubtedly be support for the band member’s forthcoming musical projects.
The “Goodbye Cruel World” tour will end with a sold-out show at New York City’s Bowery Ballroom on June 26. Lawrence was truly lucky for the opportunity to be part of this tour, and hosting Voxtrot and hearing them play one of their final sets was, to say the least, a privilege.