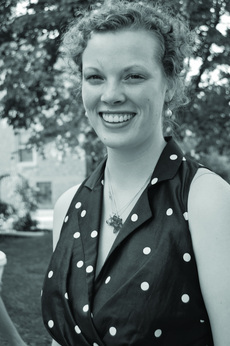 It appears that we have come to this year’s last issue of The Lawrentian, so it only seems reasonable we find someone for the final Artist Spotlight who plays the biggest instrument around: the organ.
Not only does senior Susanna Valleau wield a huge organ with ease, but she also manages to channel her impressive musicality and intelligent playing through the mammoth instrument.
This organ performance major and math minor got her start playing piano in her hometown of Andover, Mass. In seventh grade, Valleau’s church organist told her mother she should be taking lessons because she was tall enough to reach the organ’s pedals.
Valleau laughed when recounting the story, remembering how she rejected the idea. During her junior year of high school, she approached her church’s new more inspiring organist and asked for lessons.
Here at Lawrence, Valleau has played in numerous organ and keyboard recitals in addition to frequently accompanying others on the harpsichord. She also received second place in both the 2009 and 2010 American Guild of Organists’ Contest.
Now she gets to play her own recital this Sunday, May 30 at 8 p.m. in the chapel. She’ll be playing Bach, Mendelssohn, Duprs, Alain, Buxtehude and a Handel organ concerto with a string quartet.
You may have noticed a flurry of early music on that program, which Valleau cites as her favorite kind of music because she likes the “dissonances and nuances of the time.”
She’ll also be playing in the upcoming baccalaureate ceremony and the commencement concert, and after that Valleau is heading to Seattle to attend the University of Washington for graduate school.
Her hopes for after grad school? Valleau giggled as she said, “I don’t know… make a living as an organist? I just want to do what I want to do.”
So before Valleau heads off to the Pacific Northwest, make sure you catch the awesome spectacle that will be her recital. See you Sunday!