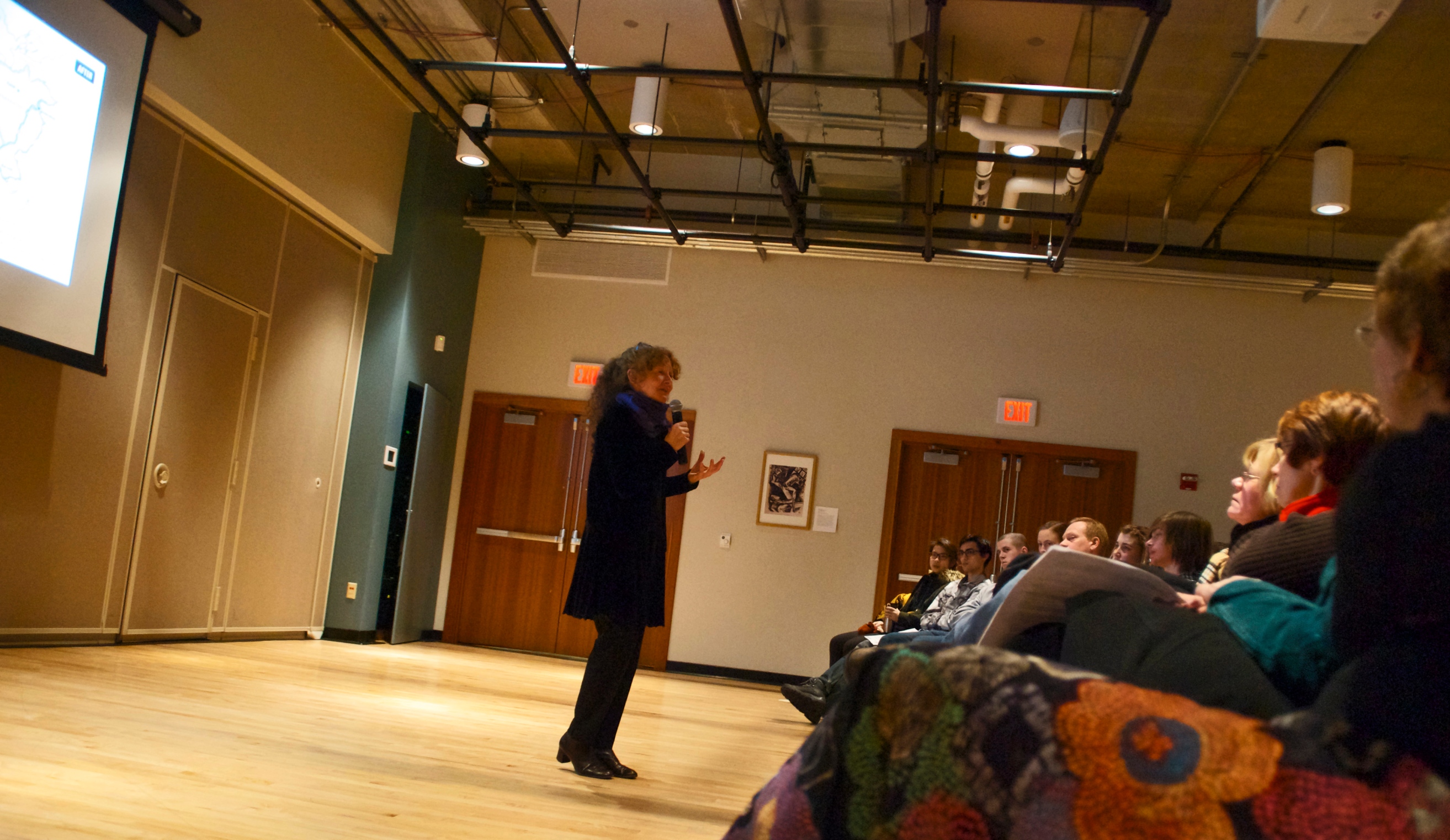 Kelly is a co-coordinator of Voices for Creative Nonviolence, a campaign to end U.S. military and economic warfare, and has worked toward peace in conflict-ridden areas such as Afghanistan and Gaza.

She began her speech by congratulating the peaceful protestors in Wisconsin, saying she took joy in telling people that she was “going to Wisconsin” at a time like this.

“If your governor had just 150 soldiers coming home,” said Kelly, “we’d have $151 million dollars…you’d have enough money to solve a lot of Scott Walker’s budgetary problems.”

The economic benefits of pulling U.S. forces out of Afghanistan were only a part of Kelly’s argument. At the root of her peace activist mission is the fact that “we are all part of one another,” and that innocent people are dying every day because of the war. Kelly shared personal accounts of her encounters with injured children at a hospital in Afghanistan who lost limbs, eyes and fingers to the war.

She then asked the audience of students and community members to recognize that this violence is still happening, and she urged people to try to “face the sorrow of war.”

“Why is it that the war can be so distant?” asked Kelly, “I don’t think we’re very adept at feeling the sorrow of war. It’s so easy to feel detachment.”

Current president of Lawrence University’s Amnesty International group, Chuck Demler, was grateful for Kelly’s voice on campus, and agreed with her message about the need to be aware of the lives of people in other lands.

“We shouldn’t feel afraid to drop away from society’s pressure toward consumerism, constant stress and violence. We shouldn’t be afraid to openly question how what we do affects people around the world,” said Demler.

A purse was passed around to collect funds for a group of 30 peace volunteers who are leaving their everyday routines to go to Afghanistan in the coming year with Kelly, a trip that she deemed as the only “commensurate means to try to educate the US public [about the war].”

While she painted a violent picture of the situation in Afghanistan and of a troubling apathy in the United States towards the war, Kelly ended her speech with a message of hope for peace.

“I think we are in that set of generations, now, that will tip the scales, that will turn the world beyond warfare. What a joyful, wonderful time to be alive.” With a smile, Kelly said, “Keep keeping your eyes on the prize.”

Kelly held a workshop for interested students, staff and faculty Wednesday evening. “The activism workshop strove to build empathy,” Demler explained. “She worked us through three exercises meant to put us in the perspective of families in Afghanistan, American soldiers [and] resistance fighters, among others.”

Senior Marie Straquadine attended the workshop and found it valuable. “[Kelly’s] approach of trying to get people to understand other people’s point of view was very useful,” she reflected.