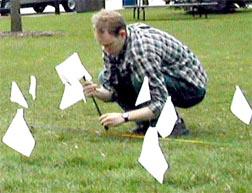 Members of the Diversity Center and other volunteers from the Lawrence community put up almost 2000 miniature flags on the greenspace in front of Sampson House last Wednesday. According to Diversity Center Programs Coordinator Curt Lauderdale, the variously colored flags are there to represent different populations of Americans who have suffered from discrimination over the years.

“We need to have a good understanding of what we [as a nation] have done to others so we don’t repeat it,” said Lauderdale.

Within the exhibit are five different colors of flags, each representing a specific population of Americans: victims of hate crimes from 1995—2000, Native Americans relocated between 1830—1850, women denied the right to vote between 1896—1954, Japanese Amercans interred during WWII, and African Americans denied equal access to public education from 1896—1954.

“We looked for major populations which people could identify with,” said Lauderdale.

The lone, rainbow colored flag in the center, said Lauderdale, represents the idea that “it only takes a single person to change things.”

The flags will remain in place through the weekend.