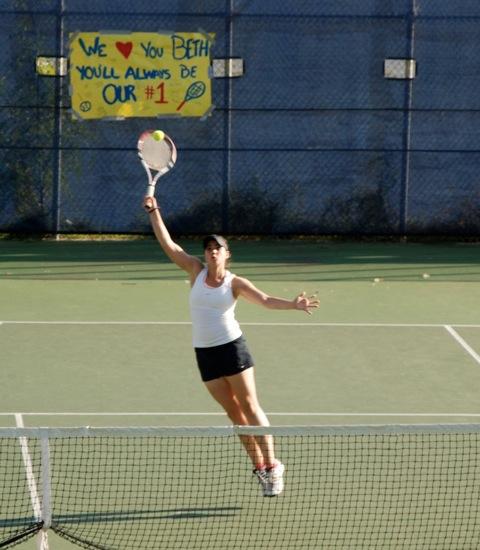 This year, the Lawrence University women’s tennis team is losing their only senior, Beth Larson. Larson has held the No. 1 singles and No. 1 doubles spots since her freshman year, and she holds every Lawrence women’s tennis record besides one.

Larson holds the title for season winning percentage with an astounding 0.952 winning percentage. She is only three matches away from having the most career wins for a single women’s tennis player at Lawrence University, but she plans to take the record during the women’s spring season.

When asked what has been her favorite part of being on the tennis team at Lawrence, Larson responded, “The tennis team has become my second family. Every summer I count down the days before preseason because I look forward to spending time with the girls. It is going to be really hard not having the season to look forward to next year. I am really going to miss not playing tennis as part of a team.”

Looking back, the most memorable match she played as part of the Lawrence women’s tennis team was winning the doubles conference title with Jennifer Roesch this year. “We were playing as one. It was just cool that we could feed off of each others’ energy so well, and the crowd was really getting into it.”

In addition to the tennis team, Larson has been involved in several other campus organizations and held a variety of leadership positions. She is currently the president of the sorority Kappa Alpha Theta and director for GlobeMed at Lawrence University. She is also one of the Co-Presidents of the Student Athletic Advisory Committee and the assistant membership chair for Mortar Board, the Lawrence senior honor society.

The future holds great adventure for Larson. She will be traveling to Senegal this winter break to work for an NGO called “Create!” in Diender. She will be working with three different improvement projects related to improving cookstoves, solar water pumping and a community garden project.

Next year, Larson plans to get a fellowship in Public Health and go to francophone Africa to volunteer in community health clinics. Although her dreams will be taking her around the globe, she hopes to join a United States Tennis Association league and continue to play tennis for as long as she is able to do so.

Although the team is losing only one senior, Larson has been an incredible asset to the team and she will be greatly missed. Wish her luck in her future endeavors, and I am sure we will be seeing great things from her in the years to come.