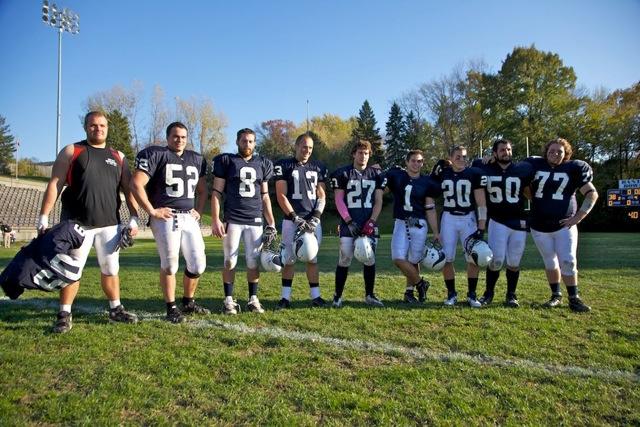 The Viking football team played their last home game of the season on Saturday, Oct. 22. The game ended in a 38-56 loss to the Lake Forest Foresters.

The Foresters scored on their first and second drives of the game to take an early lead. The Vikings responded at the end of the first quarter when junior Tyler Mazur was put in to receive the snaps at quarterback and rushed for a touchdown. The Viking defense ended the quarter with a forced fumble by senior Mats Jonsson and a recovery by freshman Dan Taylor, which started the second quarter as a Viking possession, but the offense could not manage the first down.

The Foresters scored twice in the second quarter while the Vikings racked up ten points of their own. Lawrence’s Dominique Dirden caught a pass for 18 yards for a Viking touchdown and junior kicker Cody Robel hit a career–long field goal of 40 yards, ending the first half 28-14.

The Vikings scored again when they put Mazur back in as quarterback off of a seven-yard rush in the third quarter. In the fourth, Mazur scored twice more as receiver, one 14-yard catch and one four-yard catch. Lake Forest had four touchdowns in the second half.

The Vikings ended the game with 312 total offensive yards, while Lake Forest had 610. Mazur led the team for rushing with five for 31 yards and for receiving with seven catches and 63 yards. Mazur also had four of the five touchdowns. Sophomore Shawn Martin had five rushes for 29 yards and senior Jon Bruehl had 4 catches for 64 yards, his longest being 40 yards.

Jonsson led the Viking defense with 12 tackles, a forced fumble and an assisted tackle for loss. Taylor and junior Nick Randall followed with five tackles.

“It was a tough game to swallow, being the seniors’ last game in the Banta Bowl,” said junior Ben Rabenn. “We didn’t do the things we needed to do to win on offense or defense. It was unfortunate because of what those guys mean to the program. Moving forward, we need to focus on the next two opportunities to end the season on a high note. We need to be consistent on both sides of the ball in order to do that.”

The seniors and the rest of the Viking football team have two more games left in the season. This week they will be traveling to Beloit to play the Beloit Buccaneers.