A challenge for progress

Harold Varmus, a product of liberal learning, began his education as an English major, has been a practicing surgeon, and is now director of one of the nation&s foremost cancer reasearch centers.
Andrew Karre 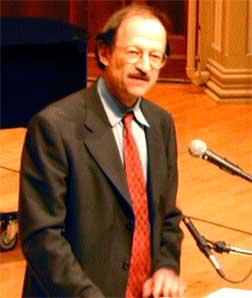 Harold Varmus, a product of liberal learning, began his education as an English major, has been a practicing surgeon, and is now director of one of the nation&s foremost cancer reasearch centers. (Quinn Lake)

Dr. Harold Varmus delivered a convocation to a crowded Memorial Chapel audience on Tuesday afternoon. After an introduction by President Richard Warch, Varmus, the president and CEO of the Memorial Sloan-Kettering Cancer Center, spoke for almost an hour on the subject of globalizing science.

Varmus acknowledged, and Warch made abundantly clear, that science has long been a global occupation and scientists a part of a global community. He contended, however, that many of the fruits of scientific study, though globally distributed, were not available consistently to all nations.

He was particularly aware of the American sense of national self-interest that allows this nation to rank last among developed countries in donations to the developing world. He suggested that if America were to reappraise its interests, it would discover that “a dime a day” could save millions of lives.

Varmus’s own vision for a new national interest in globalizing the beneficial aspects of science is for an international “culture of science” that would be “global in nature and responsive locally.” He noted that localizing the benefits of science continues to be a failing, especially in the developing world where people die of diseases that might be cured easily in the developed world.