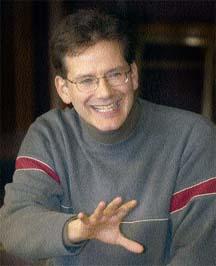 &I like sharing my ways of doing things… like as a mentor& 8212;Campbell Scott (Sharon Cekada/courtesy of Appleton Post-Crescent)

When President Warch called Campbell Scott ,’83, and asked him to serve as an Alumni Trustee, the actor and filmmaker was skeptical.His response: “Why me?”

President Warch responded by saying that he was successful in his chosen field, and that’s what Lawrence looks for in a trustee. Scott was still skeptical, but he ultimately accepted the post. The deciding factor: his time here as a student:

“It was the best four years of my life,” he says.

“It’s a matter of placing yourself in a position to observe at first. Then decide, ‘Do I want to influence or do I want to get out of it?’”

It appears as if Scott has chosen to influence. For the next four years, he will serve on the Academic Affairs and Student Affairs committees, and will have ample opportunity to influence directly the lives of Lawrence students.

While in town for last weekend’s trustee meetings, Scott spoke to the Shakespeare class about theatre, as well as at an informal reception in the coffeehouse. It was here that Scott spoke one on one with student filmmakers and other performing artists, offering anecdotes and advice.

Where most trustees are interested in improving Lawrence as an institution, Scott is also enthusiastic about improving the individual experience for students at Lawrence.

By sharing his art and his knowledge with the Lawrence community, Scott hopes to make a difference.

“I like sharing my ways of doing things?like as a mentor,” he says.

His recent appointment as a trustee doesn’t mark the first time Scott has returned to Lawrence. In 1993, he directed a mainstage production of Fahrquar’s “The Recruiting Officer.”

To be or not to be

Scott came to Lawrence as a history major, with the intention of becoming a teacher. By his junior year, though, Scott had switched his major to English and become an active member of Lawrence’s theatre community. In large part, it was now-retired professor Fred Gaines who encouraged him to make the move.

“When I first got here, I didn’t even approach the theatre area,” he says. “My senior year, I was directing, writing, and I was comfortable over there [in the drama building], and I loved it.”

If you asked him, Scott would say that, despite his change in major, his goals remained the same.

“I’m not into [historical] dates and policy. I like the stories and the people of history… Theatre is stories,” adding, “Teaching has all of the fundamental elements of theatre: rehearsal, preparation, and expression.”

In high school, Scott acted in a production of Stoppard’s “Rosencrantz and Guildenstern Are Dead” alongside longtime friend Stanley Tucci (who married a Lawrence alumna), but it wasn’t until his time at Lawrence that he felt like a real actor.

“My first production at Lawrence was as a replacement in a series of Shakespeare scenes. It was, actually, the Scottish play [Macbeth]. I had never really thought of myself as a real actor until then.”

By the end of his student career at Lawrence, Scott had appeared in only a handful of mainstage productions—including “The Crucible” as John Proctor—but had acted in, directed, and produced numerous student works.

Since his years at Lawrence, Scott has worked on many films and television movies, including Dying Young (1991) opposite Julia Roberts, The Daytrippers (1996), David Mamet’s The Spanish Prisoner (1997), and Lush (1999).

When he left Lawrence, Scott would have found the idea of directing or producing films absurd. But now, nearly twenty years later, that is exactly what he wants to do.

“I don’t like acting in film. It’s very, very tedious, and you’re just one tiny piece in a larger thing,” he says. “If I didn’t have to act in film at all I wouldn’t do it, except for tiny little parts that were really fascinating to me as characters.”

By assuming the roles of producer and director, Scott has not only increased his creative control over the projects he works on, but also added an exhausting list of duties.

There are two sources, Scott says, of the “mentoring” energy he needs to move behind the camera. The first is his personal growth both as a filmmaker and as a person. The second is his four-year-old son.

Producing and directing, he says, is “more of a life. Maybe I’m a control freak. I’m 40. I think when you get a little older; you want to run things. You want to do your own projects as opposed to the 20 years where you just take a job to get a job.

“I’m guiding and sharing now more than ever… [and these] are the energies that would put me into a kind of teacher mode.”

Scott’s directing and producing debut was the film Big Night (1996), co-produced and co-directed with Tucci.

Scott’s next big film projects were Hamlet (2001), which Scott starred in, produced, and co-directed (with LU alum Eric Simonson, ‘82), and Final (2001), which he also produced and directed.

Hamlet was shown in Wriston in conjunction with Scott’s visit to campus and represents over ten years of work with the play. Scott appeared on stage twice in the lead role, once in California and once in Boston. The Boston production was also directed by Simonson. The film version was Scott’s last chance, he says, to act the role of Hamlet before he is too old.

Scott has recently finished two films which he produced and acted in: Roger Dodger and The Secret Lives of Dentists. Release dates for these films have not yet been determined.

One avenue that Scott has not publicly pursued is writing, and he’s not sure if he ever will.

“I’ve written millions of things and never finished any of them,” he says. “Finishing is my problem. I’ve written hundreds of scenes and half-movies. That’s a joy, to really create something all by myself.”

* He once took an English tutorial from Professor Goldgar. According to Goldgar, Scott presented his paper, read the first page, tore it up calling it rubbish, and tried to throw it out the window.

* Even though he entered Lawrence as history major, Campbell never took a class from Professor Chaney. 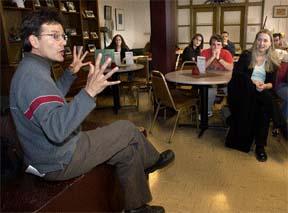