Senior Eric Davis led the Vikings by taking first place in the 3000-meter-steeplechase and second in the 5000-meter-run.
Andy York 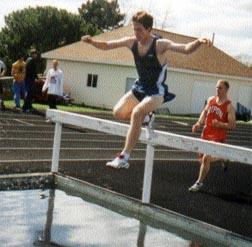 Senior Eric Davis led the Vikings by taking first place in the 3000-meter-steeplechase and second in the 5000-meter-run. (Andy York)

The Lawrence University Track team faired very well at the Wisconsin Private College Championships Tuesday. The Men and women both finished in third place. The women had many unbelievable individual performances. Sarah Slivinski was on a tear for the Vikings. She finished third in four events, and won the javelin throw. She finished third in the high jump, the long jump, the triple jump, and the 400-meter hurdles. Shelly Ebert was also a force for Lawrence. Ebert won both the 800-meter run and the 1500-meter run. Jess Moser was also a major contributor for Lawrence. Moser finished first in the 200-meter dash, and third in the 400-meter dash. Val Curtis was another runner who faired very well on Tuesday. She Finished first in the 10000-meter run, and second in the 5000-meter run. Sally Schonfeld was the last of five Vikings to place high in two or more events. Schonfeld was second in the 3000-meter steeplechase, and fourth in the 800-meter run. Other top finishers for the Vikings were Kelly Scheer who finished second in the 10000-meter run, Michelle Milne, who finished second in the 100-meter hurdles, Lisa Tranel, who finished third in the 3000-meter steeplechase, and Mary Markowitz, who finished third in the pole vault. Combined these women led Lawrence to one of their best finishes of the season.On the men’s side, there were also many individual leaders that pulled the team together. Senior Eric Davis had an outstanding day for the Vikings in his last home meet. He won the 3000-meter steeplechase, and then took second place in the 5000-meter run. Don smith also provided necessary leadership has he took second place in the 800-meter run, and with an amazing time, anchored the 4X400 relay to first place. Smith took the baton with approximately a six second deficit, and by the time he was done running, the Vikings had a two second victory. Steve Geisthardt had a very good day for Lawrence. The freshman took first in the 400-meter hurdles, and also took third in the 110-meter hurdles. Sam Buckett also had a very good day, but he did it quietly. Buckett dressed in a hideous blue warm up suit from the seventies led the Vikings in the field events. He took fourth in the long jump, second in the 110-meter hurdles, and second in the pole vault. Bucket’s second place finish in the pole vault aided Lawrence to sweep the event. Aaron Guigar finished first, and Adam Wood finished third in the event for Lawrence. Other top finishers for the Vikings include Josh Meyer finishing third in the high jump, Kyle Hewitt finishing fifth in the 400-meter dash, and Paul Schonfeld finishing fifth in the 1500-meter run. The Vikings had many individual highs, but also as a team as well. This was the best finish the men have had all season. Both teams look to keep the momentum going at they compete Saturday at the University of Wisconsin Twilight Meet in Madison Saturday.