The excitement of eighth blackbird 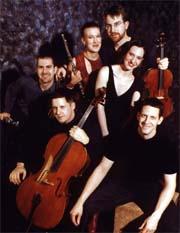 They are daring. Exuberant. Versatile. Phenomenal. One of the most exciting young ensembles performing today. As the final concert of the Artist Series on Friday, May 17 at 8:00 p.m. in the Lawrence Memorial Chapel, come and experience the contemporary music of eighth blackbird. I promise that you will leave with a newfound excitement for ensemble music.

The group consists of six talented musicians: Molly Alicia Barth (flutes), Lisa Kaplan (piano), Matthew Albert (violin and viola), Nicholas Photinos (cello), Michael Maccaferri (clarinet) and Matthew Duvall (percussion). Each of the members of eighth blackbird holds a bachelor’s degree in music performance from the Oberlin Conservatory and an artist diploma in chamber music from the University of Cincinnati College-Conservatory.

eighth blackbird is currently the ensemble in residence at Northwestern University and the University of Chicago.

The ensemble takes its name from a poem by Wallace Stevens, “Thirteen Ways of Looking at a Blackbird.” The eighth stanza reads: “I know noble accents / And lucid, inescapable rhythms; But I know, too, That the blackbird is involved / In what I know.”

A great deal of the music eighth blackbird plays is neither lucid nor rhythmic. They are performing works by their contemporaries; where no compositional approach reigns supreme anymore. These composers are creating music, no matter what the style.

eighth blackbird will be presenting three very different works for their performance at Lawrence University. The first selection, “Minimum Security Trailer,” is a sampling of a larger commission by eighth blackbird of the Minimum Security Composers Collective, a group of four composers from remarkably different backgrounds that formed in 1998 at the Yale School of Music.

This commission, entitled “di/verge,” comprises four pieces: Dennis DeSantis’s “Powerless,” Roshanne Etezady’s “Damaged Goods,” Adam Silverman’s “In Another Man’s Skin,” and Ken Ueno’s “Pharmakon.” The movements eighth blackbird will perform will give you a taste of the larger work to come.

“Thirteen Ways,” written by Thomas Albert (Matthew Albert’s father), is a set of thirteen musical miniatures inspired by Wallace Stevens’s poem. The piece is not a song cycle, for the stanzas are not actually set to music; the music is more like underscoring, or accompaniment, for a textless film of the poem’s images. eighth blackbird will be performing “Thirteen Ways Suite,” selected movements of the original composition.

The ensemble will end its performance with “Pocket Symphony,” composed by Frederic Rzewski. It was written in 1999-2000 for eighth blackbird. It comprises six movements. In each movement, one of the ensemble members has a leading role.

Not only is eighth blackbird innovative with the music they perform, they also present a kind of musical theater. Ensemble members recite poem lines, relay the music from one to another with a subtle glance or turn of their body, and move about the stage as if the piece were a choreographed dance.

And if, after all of this, you are still not sure that eighth blackbird is exciting enough to see, check out this list of awards: 2000 Walter W. Naumburg Foundation Award, First Prize at the 1998 Concert Artists Guild International Competition, First Prize Winners of the 1998 and 2000 CMA/ASCAP Award for Adventurous Programming, and top prizes at the Fischoff and Coleman Chamber Music Competitions.