The Fox Cities Performing Arts Center will open in November with a surprise production. The much anticipated Broadway Series will begin in Jan. 2003.
Devin Burke 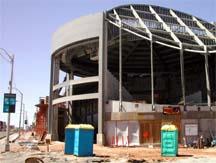 The Fox Cities Performing Arts Center will open in November with a surprise production. The much anticipated Broadway Series will begin in Jan. 2003. (Quinn Lake)

In November of this year, the building on College Avenue that has quickly formed into the impressive Fox Cities Performing Arts Center will open its doors to the public.The Performing Arts Center (PAC), which cost 44.2 million dollars to build, has already received a high level of response from the community. In particular, says J. Kirk Metzger, the executive director of the PAC, “response for the Broadway series has been phenomenal.”

So far, the PAC has announced its “Broadway in the Fox Cities” series and its educational series. The announcements of the holiday series and the performing arts series are to follow.

The “Broadway” series for 2003 will present four shows and will run from January to September. The season begins with “Mamma Mia!,” a show based on the disco music of ABBA, and follows with “Seussical” and “Jesus Christ, Superstar.” The grand finale will be Mel Brooks’s “The Producers.”

Right now, season tickets are available for all the shows, while single tickets go on sale six weeks before each opening night.

The educational series has also garnered an impressive response. Many schoolteachers have reserved tickets for shows without knowing their budget or class size for next year.

To create the educational series, the PAC worked with schools to find out what shows would match up with a typical school curriculum. Included in that series are shows that are aimed at elementary school students, such as “Ramona Quimby.“

However, there will be something for all ages, including abridged presentations of “Romeo and Juliet” and George Gershwin’s opera “Porgy and Bess,” performed by full-scale professional playing and opera companies. One particular highlight will be the Canadian Brass, who will perform on April 4, 2003.

The holiday series lineup will be announced soon, followed by the performing arts series. Among the ensembles involved in the Performing Arts series is the Fox Valley Symphony, which will no longer call Lawrence’s Memorial Chapel their home as of this season.

The building itself will hold concerts in two spaces, the main hall and the smaller Kimberley-Clark Studio Theater. The main hall, the name of which is pending, will seat approximately 2,100 people, while the Studio Theater seats around 450 people.

For Lawrence students, Metzger says, “It is important to recognize that the Performing Arts Center will present shows of the quality that you would find in Chicago or Minneapolis.” For the upcoming season, there will be plenty of entertainment offered, and according to Metzger there will be “pretty much something going on every weekend from when we open until the end of the season, and a lot of things during the week as well.”