The hippest sounds from the East and West 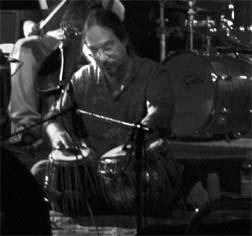 Those concertgoers who headed over to the Underground Coffeehouse last Saturday, May 4th, after the LSO concert found a different kind of music there. The “Earthworks” concert featured an eclectic jazz group consisting of musicians from across the country as well as some of Lawrence’s very own.The star of the show was Ray Spiegel, a tabla player out of the New York City area. Spiegel has been a student of Raga, or Indian Classical music, since he was a teenager and has been to India several times to study with such great musicians as Ustad Alla Rakha and Ustad Zakir Hussain.

The tabla is a set of two drums from India which one plays sitting cross-legged so as not to disrespect the drums with one’s feet. The tabla has literally countless note and phrase combinations created by subtle differences in the way the performer strikes the drum. Combining this sound with his jazz training on vibraphone, Ray fit into a jazz setting like any great instrumentalist.

Joining Spiegel were Lawrence’s own Matt Turner on cello, John Gibson on bass, and Dane Richeson on drums. It was apparent from the start that these musicians were not merely the local blokes taking up arms with the big names. On the contrary, Turner, Gibson, and Richeson caused some of the most creative and exciting parts of the concert.

Completing the group was Robert Chappell of Northern Illinois University on the vibraphone and keyboards. Coincidentally, Chappell studied with some of the same people as Spiegel during his visit to India a number of years ago. The two mentioned during the concert that they had originally met in India, where they were both studying the tabla.

With this unique combination of instruments, the ensemble took a direction in music that was unique to the occasion and yielded great results.

They opened the show with a Cuban-sounding piece that seemed to have some bluesy undertones. With this piece, the audience was introduced to the musicians’ unique style. Chappell and Turner improvised well-constructed solos that fit the bluesy and Cuban influences of the piece. When it was Spiegel’s turn to solo, he showed the audience just what unique instruments the tabla is with his use of pitch and color variation.

The next piece began with an improvised duet between Richeson and Spiegel in an odd time signature that was hard to grasp, but the players made it sound easy. The ensemble kicked in with a rather happy-sounding melody, followed by solos by Chappell, Turner, and Gibson.

Richeson stole the show on this tune with his creative soloing over the top of a vamp. Spiegel snuck in at the end of Richeson’s solo, and built intensity for a solo of his own before the tune ended.

The show continued with more creative pieces of varying styles before Spiegel showed the audience his true virtuosity with a tabla solo. He began with just one short simple idea and then got busier by adding embellishments. The control he had over the drums was remarkable as he created long phrases with a lot of shape with just two drums. It was even more impressive when he stopped playing to explain exactly what he was going to play with a large variety of very fast syllables. He then played what he had just spoken with amazing accuracy, which really riled up the crowd.

The group finished the first set with the Wayne Shorter standard “Footprints” set to an Afro-Cuban groove. Turner constructed a spectacular cello solo on this tune, starting with something very simple, using lots of space, and then building intensity and venturing a little “outside” by incorporating interesting effects into his sound, as he is known to do. A highpoint of this piece was the duet between Spiegel and Richeson. Richeson began to play a solo, but then asked out loud for Spiegel’s help in improvising. The duet was brilliant, with both listening intently to one another and neither covering the other one up.

After a quick break, the group began again with another set. The second tune was one the high points of the evening beginning with a vibes and tabla vamp. Chappell played one of his most creative solos on this tune, fitting the style of the piece magnificently. Turner’s inventive cello solo was also striking. He really took to the style of Indian music in his solo as he emulated a Raga vocalist prodigiously.

The next piece on the program featured Spiegel and Chappell on with a tabla duet. This Classical Indian-style piece was impressive, as the musicians traded ideas back and forth and added to what each had played. Spiegel, of course, was amazing, but Chappell also showed that he could be a serious tabla player. The piece reached a high point when the musicians took turns speaking their parts and then playing them.

To finish out the evening, the full ensemble went back on stage. Once again, Richeson showed the audience his solo chops with an impressive solo that was also very tasteful. The bass and tabla entered in with a vamp as Richeson finished his solo. Then Spiegel gradually came out of his vamp for the last solo of the night, pouring out streams of notes that fit together in very melodic phrases.

Overall, the concert was a solid performance, each member contributing his share of inventive soloing. And other than the occasional gaudy synthesizer sounds coming from Chappell’s keyboard, the sound of the group together worked very well. Individuals never seemed to get in the way of each other, even with the added percussive and bass effects of the tabla. If occasionally the time did get a slight bit off, the group was listening so well that it was corrected immediately.