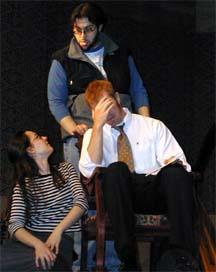 The theatre department has been looking for years for the chance to put on Moliere’s Learned Ladies. This spring, that opportunity has come, and a cast of both new and old faces to the Lawrence stage will be delighting audiences with this classic comedy. Lawrence will present a fairly new adaptation of the play by Freyda Thomas, commissioned in 1991 by the Classic Stage Company in New York. Thomas provides a fresh adaptation that updates the language of the play to the early twentieth century, while retaining the same setting and characters.

Timothy X. Troy, the director of this spring’s show, teaches Thomas’s adaptation of Learned Ladies in his Playscript Analysis course every year, and boasts of the script, “It is a feast of language, an exploration of witty and learned language.”

The play is written entirely in rhyming couplets and iambic pentameter.

Troy reports that one of the biggest challenges for the actors was “being able to treat it as regular verse and have it sound like conversation, not just the voice and the rhyme.”

This cast of twelve, ranging from freshmen to super-seniors, went back and forth throughout the rehearsals to master the balance between retaining the strong verse and having the dialogue feel natural.

“We had to really hit the rhythm at first to internalize it. Then we could have the more natural conversation with that structure still in there,” comments Troy.

Learned Ladies is one of Moliere’s last plays, and therefore it comes from a very mature Moliere. The plot deals with traditional comedy elements: the bad people lose in the end, and the good people are rewarded with a wedding.

Specifically, this play asks where the balance between education and love is, particularly for women for whom love could mean sacrificing education entirely.

Troy explains that the play “asks us to examine, ‘where is the balance in our lives?’” Between family, the larger community, and personal desires and wishes, the play tries to determine how to lead a successful social life.

This show is an especially interesting choice because of the character studies it allows actors to do:

“It has the witty, eccentric aunt, the very well-educated, smart, forceful mother, the brow-beaten husband, and the wise old uncle who helps figure everything out,” says Troy.

As well as being studied every year in Playscript Analysis, this year the cast visited Intro Aux Etudes Litteraires, the introduction to French literature course. French students studied the original French play, and cast members were able to help with the understanding of the show.

“We like to try to link our offerings with other departments,” explains Troy.

Two guest designers have been working on the show. Mike Kelly, from Los Angeles, is doing the scenic design, and Valerie Pruett, a guest from Milwaukee Rep., is the costume designer for the show.

For a fun evening, attend Learned Ladies and be delighted by this adaptation of Moliere’s classic comedy.