Tales from the far east 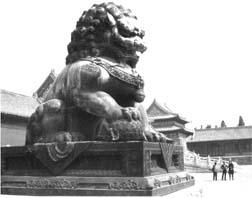 As Lawrence begins to use the 1.5 million dollar Freeman Grant, many opportunities have already opened up with many more to follow. During this year’s spring break, 24 students and faculty had the chance to spend a week in China in Japan. While there, they visited Shanghai, Xi’an, Beijing, Tokyo, and Kyoto, to name a few of the cities. Their memorable experiences varied greatly, from interaction with the people of Japan and China to walking through some of the most legendary sites in the world. Here, a few students share a small part of what they encountered

The Freeman Grant is meant to “spread awareness of Asia to American college students,” says Professor Jane Yang. One goal of the Freeman Foundation is to encourage students to broaden their horizons, and “to challenge us to go where we really need the cultural and language background,” says Yang. The students who have written here have been asked to work toward that goal of sharing how their minds have been opened.

We made stops in Detroit, Shanghai, Xi’an, Beijing, Tokyo, Kyoto, and Nara in just under twelve days.

Though the trip went by in a flash, the memories will remain forever. I know that sounds awfully clich, but in this instance, it could not be more true. The lucky twenty-four of us who got to go on the Spring Break ‘02 Freeman Trip to China and Japan would probably all say the same thing.

Perhaps the only qualm I have about the trip is that it really was too short. We covered a lot of territory in only a few days and barely got time to catch our breath. When we finally did get a chance to quietly reflect on our adventure, we were standing up in the mountains at a Buddhist monastery in Nara, Japan.

The monastery, which doubled as a hotel for financial support, stood at a high altitude, surrounded by mossy streams, cypress trees, and immaculate rock gardens. Having swapped our shoes at the door for little slippers, we dressed in our kimonos and enjoyed a peaceful evening. We slept on the ground in a tatami-furnished room with sliding doors so thin we could hear the water dribbling down from the mountain spring.

We were awakened the next morning by a Japanese horn signaling the start of the Shignon Buddhist ceremony, which was taking place downstairs from our room. The whole experience was rather surreal and heavenly, just like the trip itself.

Among the many cities that we visited, the most memorable city for me was Kyoto. Kyoto is an ancient Japanese city with numerous interesting sites. The cherry blossom season had just started when we arrived in Kyoto. Wherever you looked, there were cherry trees in full blossom.

It was a delight to walk through the narrow streets of the Gion district, watching its people. Occasionally, we saw one of the Geisha for which Gion is so famous.

We stayed in a traditional inn, called a ryokan, where the floors in our rooms were covered with tatami mats. Once my roommate and I had settled in our room, two elderly Japanese women from the inn brought us tea.

Neither my roommate nor I spoke any Japanese and unfortunately, neither of these two Japanese women spoke any English.

One of them stared at me as if she were measuring my size with her eyes while she started to unfold a kimono. Then, she pulled at my clothes and indicated that I should take them off. It took me a while to realize that she wanted to get me ready for the public bath.

Since there was a shower in our room, the thought of a public bath did not seem very appealing to me at that moment (this would change later during the trip, when there were no other forms of bathing available). I got out of the situation by waving my hands, and shaking my head almost hysterically.

After this first encounter with Japanese culture, we proceeded to

our dinner. It was a beef sukiyaki, which is a very popular Japanese dish. The main ingredient is thinly sliced beef, simmered in a pan in the sukiyaki sauce with many vegetables.

We were told that this dish was mainly served to sumo wrestlers; afterwards, I could definitely feel why.

We took a long walk that night in a temple garden. Surprisingly, the garden was full of people picnicking on tiny spots of grass. The highlight of the garden was a giant cherry tree in its fullest blossom. It was one of the most beautiful sights I have seen in my life.

Sadly, after only two days, we had to say sajonara to Kyoto, but I promised myself that I would return some day.

Having been to Japan once before, my experiences in China were obviously more memorable. Although many Lawrentians have been to countries where the average citizen is significantly poorer than we are, I had not. That difference struck me most during our time in China.

In the Religious Studies department, I have learned a great deal about China’s history, peoples, and religions. However, when first confronted by the mobs of beggars and street vendors, I found it difficult to reconcile what I have studied and what, for me, was one of the most prominent aspects of my experience in China.

Nonetheless, I found relevant cultural perspectives in the Lawrence graduates I spoke to in Beijing. One noted that she had no credit cards and that her life was very simple there.

When I noticed that few people rode the extremely nice Beijing metro, I realized that the difference between the $.37 and $.12 fares for train and bus were a huge difference for most Chinese.

However, despite my bewilderment, I found East Asia to be a fascinating, beautiful place, to where I would love to return. I obviously encourage other students to participate in or plan their own trips with the help of the Freeman Grant.

The trip to East Asia was a whirlwind of walking, flying, train riding, and more. Because we visited so many places in such a short amount of time, we were able to directly compare cities and countries before our memories started to make things fuzzy.

One thing that shocked me during the trip was just how different China and Japan are. If you take Modern East Asian Civilizations, you’ll learn that, although the two countries have very similar pasts, in their present-day state, they have huge differences.

This spring break, I learned that the word “differences” is a huge understatement. These countries are worlds apart in many respects—for example, the disparities between the rich and the poor, the overall standard of living, etc.

I actually saw the things I previously thought were just pictures in a book! It was like I was immersing myself in a living text, and the professors and guides filled in for the lectures.

It was definitely one of the most crazy and mind-boggling learning experiences I’ve had.

Our tour guide informs us that the city of Shanghai is growing and embracing development along its eastern side by the Pudong. To my query, she insists there was no resistance from the highly wealthy farming population.

I’m now peering out at the farming suburbs of Xi’an and am reminded of the exquisite drive from eastern to western Shanghai. The estuaries, groves of flowering shrubs and delightful valleys seem to nod in the same sublime happiness of its population, immersed in the daily pleasures of tai chi, smoking, chatting, tea, and chess. These activities have yet to be connected to the market for a sale
value, or “plugged into the system,” as the globalization guru Thomas Friedman would explain it.

The veins of the land run so deeply
Yet customs and change clog the vessels
The thick flow coagulates but suddenly may thin
Blood sputtering everywhere
What hand is left clean or dry?

I am sporting a fading red sweater, as we enter the city of Tiananmen Square. It reminds us all of the latent impact of this people’s forsworn leader, evident even through the ancient culture and layers of history shown by world-class museums.

There is a perennial challenge between preserving culture and reaping a profit for societal betterment—especially for the post-colonials. And where do my foreign eyes assume the right to wish the hutong (narrow, urban roads connecting communities) to outlive modern, high-rise living, complete with Internet access?

A Hutong back-alley, just north of the Forbidden City, in Beijing. (Alex Wille) 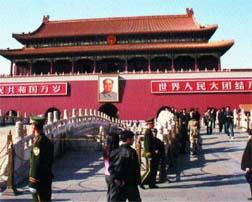 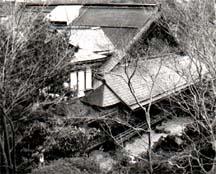 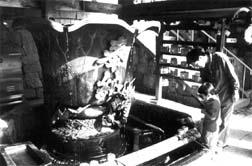 A father and son at Todaiji Temple in Kyoto, Japan. (Alex Wille)